Diane Ament and Sue Meacock, members of the Newmarket Stage Company board, both share a long history of involvement on the stage and behind the scenes with several local theatre companies
Oct 21, 2020 12:00 PM By: Rod Urquhart 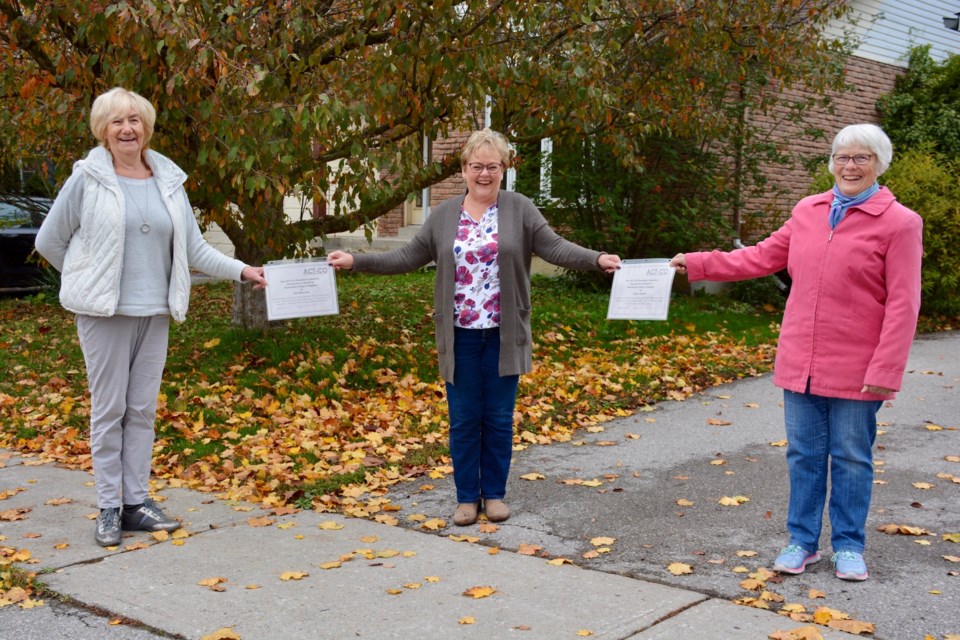 Diane Ament and Sue Meacock, longtime board members of the Newmarket Stage Company (NSC), have been given the prestigious President’s Award by Association of Community Theatres – Central Ontario’s (ACT-CO) Anne Currie-O’Brien.

Ament, who has been on the NSC Board some 20 years or more, and Meacock for 15 years herself, were more than worthy recipients of this award, according to Currie O’Brien.

Currie O’Brien, who has known both since about 1986, said Ament “is a very hard worker who could get publicity when the arts in Newmarket really weren’t being covered. She’s a very dependable person who gets things done and that’s key and an important attribute.”

About Meacock she said, “I’ve known Sue a long time, since her time with Theatre Aurora and the Newmarket Theatre Centre. Sue is also a hard worker and she brings a smile to your face. She is simply delightful.”

As mentioned in bold letters on the ACT-CO President’s Award to Ament: “President for many years, fearless and wise, Diane is a theatre whirlwind – no job is too big or too small. NSC is healthy, despite COVID-19, because of her guidance.”

Meacock’s award reads, “Sue Meacock is producer extraordinaire. She is a real theatre trouper, never saying ‘no’ and making sure all the shows run smoothly … and she’s been doing it faithfully for years.”

ACT-CO represents 36 community theatre groups, from Oshawa to the east, to Orangeville, Georgetown and Erin to the west, to the Lakeshore in the south and up to Huntsville and Muskoka in the north, so it’s quite a wide area, with 11 recipients of the President’s Award this year.

Meacock, who was a dancer in her native England, came to Canada in 1964 and settled in Georgina. She was one of six on a board that created the famed South Shore Theatre (now defunct) and she also sat on the board of the also famed Red Barn Theatre (since burned down).

Meacock, who had parts in mostly musicals, has a long history on stage, from SST to Theatre Aurora, to Markham Theatre to the Queensville Players and Newmarket Theatre Centre. She was also on stage for all of the Gilbert and Sullivan musicals done by the now defunct Hilltop Musical Theatre Company, which had quite a following in its day. It was a York Region-wide musical theatre group that was very well established.

Meacock eventually moved from Georgina to Aurora and was a member of Theatre Aurora for some 30 years and is a ‘lifelong member’.

When she received the award, the Newmarket resident said she “could not believe it."

"It was incredible. The NSC supports ACT-CO and we have so much fun at the annual ACT-CO Ball, which was cancelled this year because of COVID-19,” Meacock added.

NSC president Ament said, “I was surprised and happy and delighted. Sue and I couldn’t believe it.”

Ament, who also lives in Newmarket, was also born in England and emigrated to Canada at the age of seven. She was in her first play in Grade 8 in Toronto. She moved to Newmarket in 1972 and immediately got involved in the local theatre scene.

She joined the Newmarket Theatre Centre, which later became the Newmarket Stage Company, when it merged with the Old Town Hall Players in 1995. Ament, over that time, was in more than 20 plays and also helped with make-up when her daughter became a make-up artist for movies and taught her the tricks of the trade. She also was in several plays in Aurora and also the Queensville Players out of Keswick.

She said the current board of the Newmarket Stage Company works well together and they are weathering the COVID-19 pandemic with a play reading done on Zoom in the summer and also an old-time radio drama, also done on Zoom in October. They are planning a Christmas play to be done via Zoom.

As for the next NSC play hitting the stage at the Legion, “Everybody is rarin’ to go once they allow enough in for an audience, so stay tuned,” she said.