A Bradford resident's Infinite Earth blog and social media sites are catching the attention of followers and some big names in the entertainment business
Jan 26, 2019 4:20 PM By: Jenni Dunning 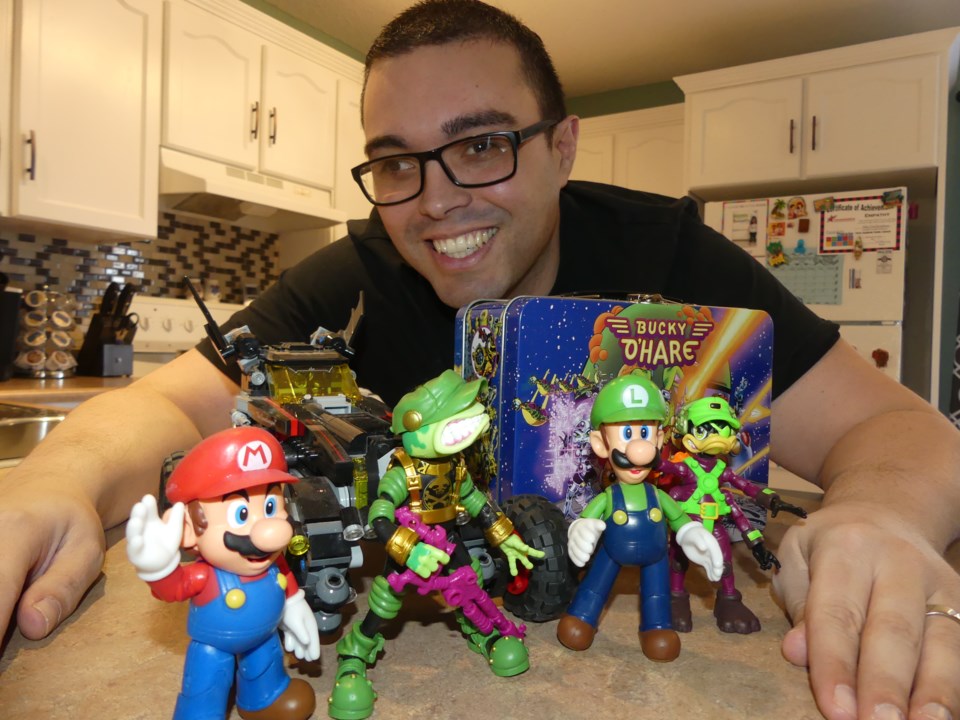 John DeQuadros with some of his characters from Nintendo and Bucky O'Hare. Jenni Dunning/BradfordToday

One Bradford West Gwillimbury man has turned a childhood of watching cartoons, reading comic books, and playing with action figures into a career.

John DeQuadros is the man behind Infinite Earths, which shares pop culture news and reviews online.

From his home, the 33-year-old father has built a pop culture brand that has garnered him more than 50,000 followers on social media and is getting interest from the likes of DC Comics and Dark Horse Comics.

But one of his favourite parts of it, he said, is just getting to feel like a kid.

“I remember what it was like — Saturday morning cartoons with my brother with a bowl of Froot Loops, or playing video games (inside during) a blizzard. Waking up and it was still dark outside, and watching Bob Ross and Bucky O’Hare,” he said.

“The part I enjoy the most (is to) be able to interact with a product … and just have fun with it.”

Companies such as NECA will often send DeQuadros action figures, or Warner Brothers and 20th Century Fox will mail him Blu-rays, for free to review.

He gets about three or four FedEx deliveries a week, and his family jokes if they see a delivery truck they assume it is something new for him.

DeQuadros has interviewed comic book artists, voice actors, authors, Hasbro toy designers, and actors such as Diedrich Bader, who is known for his roles in The Drew Carey Show, Office Space, and American Housewife.

DeQuadros has also been invited to movie premieres for Justice League and Venom, and to conventions like the New York Toy Fair and San Diego Comic-Con.

But, so far, he has to turn down most invites because he has cerebral palsy.

His condition, though, is what inspired him to launch Infinite Earths.

“I have a lot of pain, discomfort. Mobility is very difficult. Growing up, I wasn’t the kind of kid who played sports,” he said, adding he would often read comic books, watch movies, and play with action figures.

“They kind of served as an escape for me. It would help me cope with the pain a little bit better.”

In 2012, during a particularly difficult time with his cerebral palsy when he had to lie down for days at a time, one of DeQuadros’ relatives suggested he start a pop culture blog.

“YouTube was a big hurdle for me, too,” he said, adding he had to overcome self doubt.

Currently, DeQuadros does not make much money from his venture, but he is working to build Infinite Earths into a more widely recognized brand and, eventually, make more money through YouTube and other venues.

He recently invited me to his home, where he does all his writing and video production.

He has several Nintendo and Bucky O’Hare characters sitting on his kitchen countertop, and a dozen more displayed on shelves in his living room.

He brings out a dinosaur from Jurassic Park — one of his favourite franchises — that was a gift from his wife.

While he shows me around, his phone buzzes. The ring tone is a sound effect from Predator.

Sitting at his kitchen table, DeQuadros pulls up a tablet, which he uses for all his email and social media communication, and as his main tool for all his review videos through the Filmigo app.

After finding the right light for and taking photos, adding filters, doing voice work, editing, trimming, and posting, he said it takes about a day to complete on review video.

So far, he has reviewed action figures from Ghostbuster, Nintendo, and Bucky O’Hare. His latest is about the Bucky O'Hare Storm Toad Trooper.

Although his YouTube reviews are relatively new, DeQuadros’ online reviews have gotten attention from many advertisers and companies, with some paying for shoutouts or asking permission to quote his reviews on the back of graphic novels.

“DC Comics has approached me and said, ‘We’d like to use your quotes in the future,’” he said, noting Dark Horse Comics has done the same.
As DeQuadros works on growing his YouTube channel, he said he would also love to make a trip out to NECA in New Jersey one day to see some of his favourite products from Terminator, RoboCop, Spyro the Dragon, and Alien — “more stuff from when I was a kid.”

That childlike love of all things pop culture is a driving force behind what DeQuadros does, and he hopes other people interested in following a similar career path as him will not let self doubt stop them.

“Don’t allow feelings of negativity to prevent you from doing something like this. If I had done (that), I wouldn’t be here either,” he said. “Don’t be afraid to follow your dream. You never know what tomorrow might bring.”