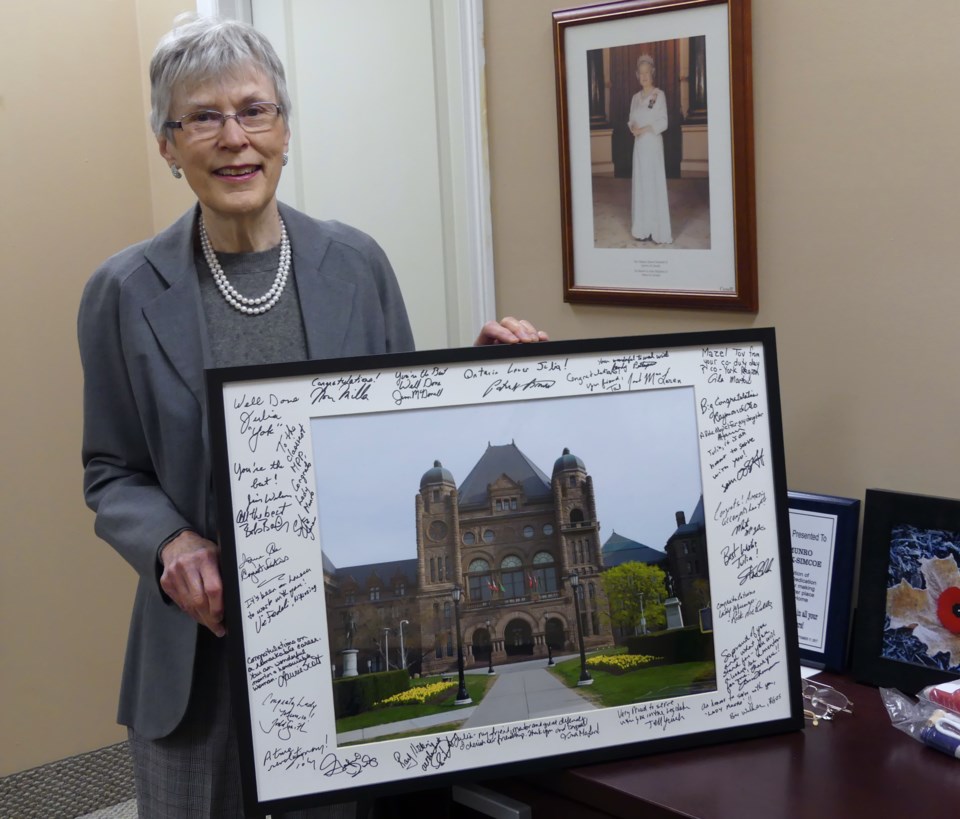 File photo. York-Simcoe MPP Julia Munro shows off a framed photo of the Ontario legislature, which is signed by all the other Ontario MPPs for her retirement. Jenni Dunning/Bradford Today

“She was a trailblazer and her memory will live on for years to come,” he wrote on Wednesday.

“Julia was a tireless and dedicated advocate for the people of York-Simcoe. Her service to her community and her province is an example for all of us privileged to serve at Queen’s Park.”

Don't want to miss the local news? Sign up for our daily headlines email

Munro started her career as a history teacher, and she was first elected as an MPP in June 1995.

Eventually, she became known around the legislature as ‘Lady Munro.’

She went on to introduce six bills in the legislature, including a small business bill of rights, and another to fine dog abusers up to $60,000.

Her passion for animals began at age 14 when she started competing show dogs.

She kept up the hobby throughout her entire adult life with standard poodles and borzois.

“On my honeymoon (with husband, John), we actually visited a kennel. It was a kennel that had really great show dogs and I had seen them advertised. The people who owned the kennel were just dumbfounded. They were very charming about it, but… ‘You’re on your honeymoon?’”

Throughout her career, Munro held more than a dozen different positions, such as official Opposition critic for the poverty reduction strategy, deputy speaker of the legislative assembly, and the Progressive Conservatives (PC) caucus’ critic for the Ontario Retirement Pension Plan.

“I told my father when I was about 17 or 18 that he’d brought me up to compete with little boys and that’s what I intended to do,” Munro told BradfordToday last May.

“He was upset because he could see that that would take me out of the stay-at-home mother and sort of mid-century expectations. It was OK to be bright and educated but you don’t want to flaunt it, I guess. All that’s changed with very few exceptions.”

In an interview last year, Munro said she was a minority as a woman in education and then politics, but it never bothered her.

“Is this a big deal? No, I don’t think it is,” she told BradfordToday.

“In her role as Parliamentary Assistant to (the) Premier and as Deputy Speaker, she set a shining example of how women are able to be both elegant and powerful,” she wrote in a statement.

“She left a tremendous impact on the province and helped to make it a better place.”

MUNRO, Julia Ann Louise (Campbell)
Jun 13, 2019 7:37 PM
Comments
We welcome your feedback and encourage you to share your thoughts. We ask that you be respectful of others and their points of view, refrain from personal attacks and stay on topic. To learn about our commenting policies and how we moderate, please read our Community Guidelines.