"Our commitment is to Canada's nature across the whole country,' says Chrystia Freeland
0
Oct 9, 2019 4:10 PM By: Raymond Bowe 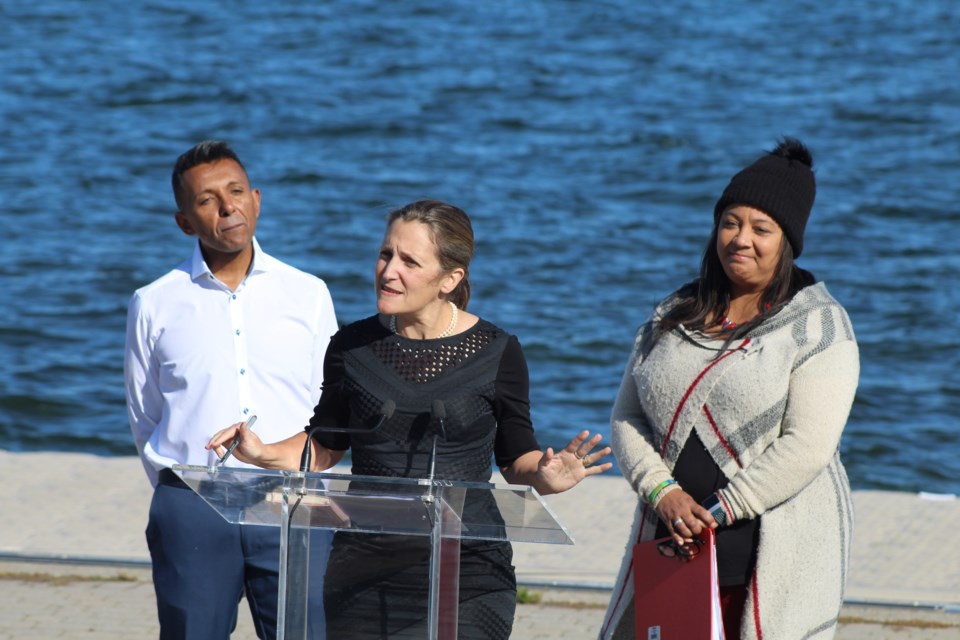 Federal Liberal candidate Chrystia Freeland speaks at a news conference Wednesday, Oct. 9, 2019 in Barrie where a $40-million plan for Lake Simcoe was announced along the shores of Kempenfelt Bay. With Freeland are local candidates Brian Kalliecharan (Barrie-Springwater-Oro-Medonte) and Lisa-Marie Wilson (Barrie-Innisfil). Raymond Bowe/BarrieToday

With Kempenfelt Bay serving as the backdrop, the Liberals announced a four-year, $40-million plan to clean up and restore Lake Simcoe during a news conference today in Barrie.

Chrystia Freeland, the Liberal candidate for University-Rosedale in Toronto and who serves as foreign affairs minister in the Trudeau government, was bookended by local candidates Brian Kalliecharan (Barrie-Springwater-Oro-Medonte) and Lisa-Marie Wilson (Barrie-Innisfil) for today's announcement, which was made behind the Southshore Cente.

The local details were limited, however.

"I quite intentionally spoke about broader challenges and our broader plan to fight climate change, to help Canada move to the cutting edge of the innovation economy and to protect our natural environment across the whole country, because that is the big picture," Freeland said. "I trust Canadians to believe in and value the big picture."

Freeland said "it's important to structure that approach from the ground up. You can't see Lake Simcoe from government offices in Ottawa, but people can see it here."

Locally elected MPs would work with their community and with local "activists" to forge a plan "through an open and consultative process," Freeland added.

"It's important for people here in Barrie to understand our broader commitment," she said. "We understand the very specific needs and challenges of Lake Simcoe. The part that I think it would be a mistake to sort of colour in right now is, I truly believe the specifics of the plan would need to be developed here in the community, from the grassroots up."

That "bigger picture," she said, is the Liberals would implement a $3-billion nature protection fund for projects across Canada.

Just over two weeks ago, local Conservative candidates made a similar announcement along the shores of Lake Simcoe, committing $30 million to cleanup efforts if elected.

Freeland was asked whether today's announcement was in reaction to the Tory plan unveiled just up the shore.

"I am incredibly confident to run on our government's environmental record, and I think Canadians know it," she said, adding the Liberal plan isn't about "boutique projects."

"By the way, I'm here in Barrie because we're talking about Lake Simcoe, but it's not a commitment to just Lake Simcoe," Freeland added. "Our commitment is to Canada's nature across the whole country."

Freeland also wanted to "point out the contrasts" between positions held by the Liberals and the Conservatives, particularly at the provincial level. She said Ontario "unfortunately has a provincial government that continues to downplay the risks and seriousness of climate change."

She said the Conservative plan is "to make pollution free again, a plan that is not really a plan" and doesn't address the long-term effects of climate change, which she referred to as "intellectual dishonesty."

If re-elected, Freeland also said a Liberal goverment would create a new Canada water agency to protect and manage the country's freshwater resources, "to keep it safe and clean in our changing climate." That also includes more protection for the Great Lakes and other water bodies, including the restoration Lake Simcoe.

Freeland also outlined other Liberal plans linked to the environment.

She said Canadians need to make "smart choices." That would include a Liberal government investing in retrofits for 1.5 million homes, through interest-free loans to homeowners of up $40,000, to make them more energy-efficient and handle the "extreme weather" brought on through climate change.

Freeland said "putting a price on pollution" is a policy that works and also puts money into the "pockets of hard-working Canadians."

"The science is clear, the evidence is clear, and Canadians know it," she said. "We must step up and protect our environment. Our children and our grandchildren are counting on us."

The federal election is Monday, Oct. 21.

Newmarket man, driving with 4-year-old daughter, charged with impaired
May 28, 2020 10:17 AM
Comments
We welcome your feedback and encourage you to share your thoughts. We ask that you be respectful of others and their points of view, refrain from personal attacks and stay on topic. To learn about our commenting policies and how we moderate, please read our Community Guidelines.