James Cooper Morton was still married to Newmarket Justice of the Peace Rhonda Shousterman when he married another woman in St. Catharines in May 2018
0
Sep 11, 2019 5:01 PM By: Global News 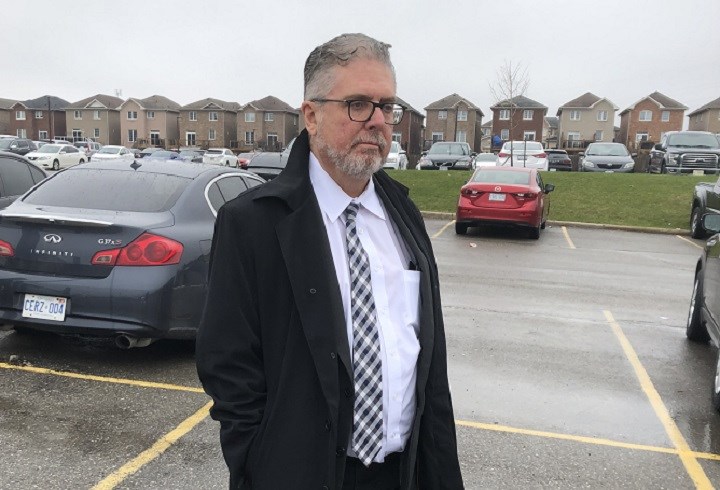 A once well-respected Ontario and Nunavut lawyer, and former president of the Ontario Bar Association, has been sentenced to six months house arrest and 50 hours of community service after pleading guilty to forging divorce documents and bigamy.

James Cooper Morton, who pleaded guilty to the offences in April, has also been ordered to have no contact with his then-girlfriend Jennifer Packwood for six months. Packwood is the former clerk from Morton’s Hamilton law firm he married in St. Catharines on May 12, 2018, despite the fact he was still married to Newmarket Justice of the Peace Rhonda Shousterman.

“It is more than a little baffling that he (Morton) would go through with the marriage knowing that the outcome would be that he would be found out,” Justice Howard Borenstein said.

Morton’s lies began to unravel in October 2017 when Packwood, who he bought a house with in Hamilton, was waiting for Morton to get a marriage licence and became impatient.

Packwood had got divorced and planned a wedding for that month, but when Morton showed her a phony divorce order, she called off the wedding and took matters into her own hands.

Unbeknownst to Morton, Packwood sent a law student from Morton’s firm with the fake divorce order in hand to the Newmarket courthouse in an effort to get a divorce certificate. It’s there a court clerk became confused because there was no file number matching the divorce order and no record of any proceedings involving Shousterman and Morton.

The articling student was sent on her way as the clerk began to investigate. In the meantime, Packwood rescheduled the wedding for May 2018. By then, York Regional Police had already been called in.

Shousterman was interviewed but said none of it made any sense.

Just four days before the wedding, police contacted Morton and told them why they wanted to see him. Morton told investigators he was unavailable until May 19.

Morton had managed to get a marriage license after going to Hamilton city hall himself with a bogus divorce order, and the wedding went ahead.

He was later charged with bigamy and forging documents after a law student sent police pictures of the bogus wedding and a copy of the wedding invitation.

Borenstein acknowledged that Morton admitted to being depressed and burnt out when Morton addressed the court during the sentencing hearing but said, “Mr. Morton has not offered any explanation for these offences. I believe he’s profoundly remorseful not just for being caught but also for the pain he’s caused.”

He called Morton’s actions a “dishonest manipulation of the court system.”

“By forging these orders and getting married, this was no longer a private matter,” he said, adding an aggravating factor is that Morton is a lawyer is is duty bound to protect the administration of justice.

Borenstein said that since Morton has no criminal record, pleaded guilty sparing the victims from having to attend a painful trial and seems genuinely remorseful, he deserves a sentence that is “restrained and compassionate” while sending a message of denunciation and deterrence.

Morton will have to spend the first two months of his six-month conditional sentence under house arrest. He will not able to leave his residence except for religious services or medical appointments.

During the following two months, Morton will have a curfew between 9 p.m. to 6 a.m. curfew. For the last two months, he will have to be at home between 11 p.m. and 6 a.m.

Stephen Bernstein, Morton’s lawyer, said his client, who is undergoing mental health counselling, is satisfied with the sentence.

“It’s a very difficult case and situation and I think the key is he found that Mr. Morton was genuinely remorseful,” he said.

Bernstein, who had asked the judge to give Morton a conditional discharge, said his client will likely never practise law again.

Morton is currently suspended from practising law by the Ontario Law Society.

Comedian Ron James brings Full Throttle tour to Newmarket
Feb 20, 2020 8:00 AM
Comments
We welcome your feedback and encourage you to share your thoughts on this story. We ask that you be respectful of others and their points of view, refrain from personal attacks and stay on topic. To learn about our commenting policies and how we moderate, please read our Community Guidelines.