The deaths of 40 racehorses at tracks, while tragic, has offered an opportunity for change that has been a long time coming, says the Newmarket native and president/chair of Stronach Group
0
Jan 26, 2020 5:06 PM By: Canadian Press 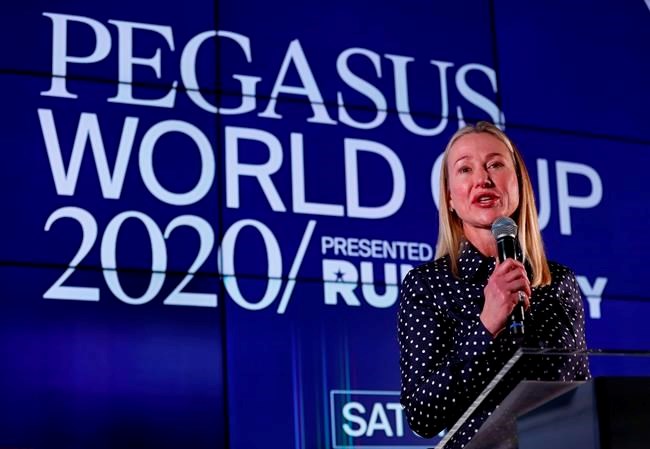 HALLANDALE BEACH, Fla. — There was a frothy cappuccino in a tall glass mug on the table in front of Belinda Stronach. She was seated on a white couch, looking out the floor-to-ceiling windows to survey another sun-drenched day at Gulfstream Park.

Thing is, these moments are few and far between.

The chairman and president of The Stronach Group — which owns and operates several horse tracks, including Santa Anita — said in an interview with The Associated Press that the deaths of about 40 horses at that track alone in the last 13 months is "a wake-up call" that the sport needs to listen to very closely.

"My daughter is 26, my son is 28 and they're both extremely conscious about the environment, about animal welfare and so are all of their friends," said the Newmarket, Ont., native who was also a member of Parliament from 2004 to 2008. "They won't come to a horse race unless they feel that we're doing everything we can to take care of the horses and that the horses have a quality of life from the time they're born to aftercare, after racing. They're not unique. That is the generation of today. I'm that way as well."

The Pegasus World Cup Invitational series, run at Gulfstream on Saturday, was run under no-race-day-medication rules for the first time. Stronach made that call relatively late in the planning process, knowing the timing of that decision would cost her event some big names — Eclipse Award winner Maximum Security, the disqualified would-be winner of last year's Kentucky Derby, among them.

But these days, she insists, safety has to outweigh all other concerns. With the sport in North America starting to pivot quickly toward medication-free racing anyway, Stronach decided to change the Pegasus rules basically on the fly. The no-race-day medication policy has long been in place at tracks around the world, and horses seem to break down far less frequently as a result.

"You have to compliment Gulfstream Park and The Stronach Group to take a step in that direction," trainer Kiaran McLaughlin said. "It's probably overdue that we go with no Lasix and other medications. ... We have to make some changes and they're making the change."

Horseplayers apparently didn't mind the new rules. Gulfstream had a total handle Saturday of $41.8 million, up 10 per cent from last year when there was medication allowed in the Pegasus races.

This week, the California Horse Racing Board is expected to release a long-awaited report about the horse deaths at Santa Anita. The numbers — 37 last year, three more this month — sound appalling. PETA and other animal-rights groups have called for massive changes, or simply shutting down the sport altogether.

"There is an opportunity to evolve the sport and I think others are waking up as well and recognize that we have to evolve," Stronach said. "We're having very good discussions with other parties and other race track companies, racecourse companies to adopt similar measures. This is a global sport. Let's move to the same standards. Let's create a level playing field. Let's move to the highest standards consistent with or better than international standards."

The standards go beyond changing the medication rules. Stronach is looking at all aspects of the sport, even studying if the training and racing surfaces at Santa Anita can handle dealing with 420,000 horses in a year. She said experts have told her the surfaces are fine, but The Stronach Group is still looking at expanding its facilities at the nearby San Luis Rey Training Center.

Context, she said, is also important.

The Stronach Group said 420,000 horses ran or trained at Santa Anita last year. With 37 horses having broken down on the tracks there last year, that roughly works out to 0.009 per cent.

That's a tiny figure. But to Stronach, that's still too much.

"At Santa Anita, we have some incredibly challenging days," Stronach said. "I mean, it's extraordinarily stressful for everyone that works there to witness because it takes time for change to occur. But at the same time, there's an opportunity we have before us where we can change things for the better."