Hollingsworth land not for sale, except for small slice

Newmarket council votes to retain Hollingsworth Arena land, likely to be developed into green space for community use
May 23, 2019 2:00 PM By: Kim Champion 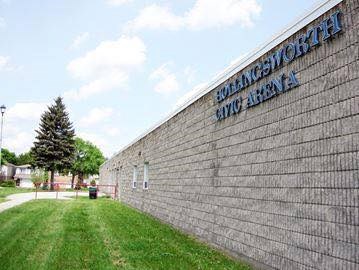 The Hollingsworth Arena at 35 Patterson St., in Newmarket. Town of Newmarket photo

Optimism won the day Tuesday as a strong majority of Newmarket council believed the town and its citizens could enjoy the best of all possible worlds by selling only a small portion of the Hollingsworth Arena lands to a developer.

The two dissenting voices, Deputy Mayor and Regional Councillor Tom Vegh and Councillor Grace Simon, saw the chance to sell the entire parcel at 35 Patterson St. as an opportunity for greater community improvement in the Huron Heights area, particularly with regard to seniors housing.

But council decided in a 7-2 vote to offer for sale only the southerly 21 metres of the Hollingsworth land and retain the remainder for community use, which is likely to be developed as a park or public green space.

“This is a good way forward,” Mayor John Taylor said. “I think we’ll look back and we’ll see there are reasons to celebrate, both in protecting green space and in the advancement of our (Yonge Street and Davis Drive) corridors, and in new housing options.”

Councillor Jane Twinney, in whose ward the Hollingsworth Arena land is located, has long led the community discussion about the soon-to-be decommissioned arena and potential development plans for the two adjacent properties that front Davis and are owned by Briarwood Development Group.

At issue were two development scenarios floated by Briarwood, one of which involved the purchase of the town-owned land in its entirety to allow for the addition of a six-storey seniors building, along with some ground-floor space identified in the blueprint as a community facility, and a small park.

That would have been in addition to Briarwood’s concept plan for its own land at 693 and 713 Davis, which includes two 15-storey residential buildings with commercial use and townhouse units proposed at the base of each tower.

Without the Hollingsworth land, 289 residential units would be built in total, as well as 1,260 sq. m. of commercial space.

“I don’t support (selling Hollingsworth land in its entirety),” Twinney said. “Both development scenarios fulfil the intensification we’re looking for on the corridors, but this area has been a recreation facility for some time, even though it’s come to its end of life. I think there’s potential for other recreation that can be a benefit to the community, whether it’s a splash pad or basketball court or green space.”

During the debate on the issue, many on council expressed concerns about the increase in traffic that high-density development would bring to the already congested area.

“With the density and activity in that area already, I wonder about traffic and parking, particularly with the concerns around parking on Patterson Street already with the medical facilities that are there,” Councillor Christina Bisanz said.

Councillor Kelly Broome echoed that sentiment, saying she’s not convinced the area could handle the increased number of people the proposed addition of a seniors residence would bring.

With few exceptions, council agreed that preserving green space in an area pegged for high density and intensification efforts in the years to come trumped the proposed additional housing options in the short term.

“We have to cherish any green space we can get a hold of so future generations can enjoy it,” Councillor Bob Kwapis said. “From the perspective of our residents, we have a small footprint and it’s getting smaller as green space disappears.”

Briarwood has not yet submitted a formal development application to the town.

Council still has to finalize its decision at the May 27 council meeting, which includes asking staff to report back on potential future uses of the Hollingsworth land, along with financing options that could come from the sale of the small portion of the property.

To read the entire report on the subject, visit here.

Hollingsworth Arena site development back in the spotlight
Feb 7, 2019 1:45 PM
Comments
We welcome your feedback and encourage you to share your thoughts. We ask that you be respectful of others and their points of view, refrain from personal attacks and stay on topic. To learn about our commenting policies and how we moderate, please read our Community Guidelines.