Helping athletes stay in the game a passion for this trainer

Athletic therapist and personal trainer Jen Mark is launching a regular column on NewmarketToday
Nov 21, 2019 8:26 AM By: Debora Kelly 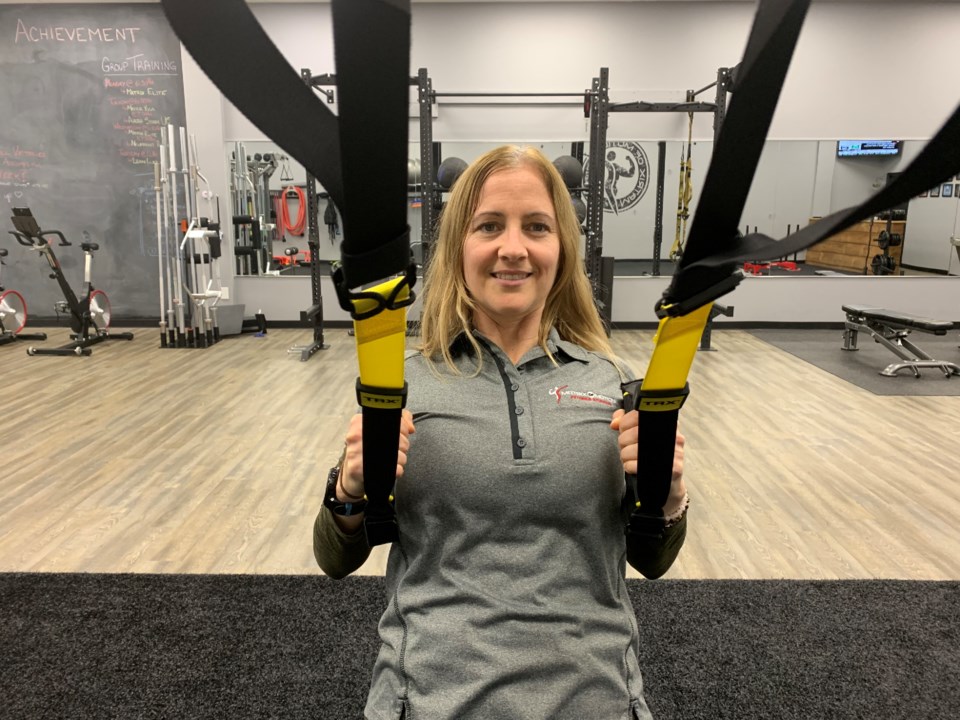 Don’t be too quick to hang up your skates — or your cleats or running shoes.

Jen Mark has made it her mission to help injured athletes, whether they be weekend warriors or professionals, to get back in the game or working out after a sports-related injury.

“If you’re thinking, ‘I can’t do anything’, if your knees are sore, or your shoulder is sore, or even if you have a broken wrist, there are so many other things you can do,” the Newmarket athletic therapist and personal trainer said.

Knees and back injuries are the most common ailment, said Mark, who also helps her clients navigate through the health care system.

A longtime athlete herself, Mark followed a path of kinesiology and health promotion at York University, knowing she wanted to “help people get out and do things”.

However, after being exposed to athletic therapy — and injuries of her own — running track and cross-country at York, it sparked a new path for her career.

After working briefly in a gym as a personal trainer, she returned to York to become a certified athletic therapist.

“It changed the way I trained, it made me a better personal trainer, as you know the body better — you get a deeper dive into anatomy and functional anatomy. With this skill set, when someone comes in and says ‘I have a tear in my rotator cuff’ or a shoulder blade that’s not working that well, you immediately know what that means and how you can work with that.”

Therapy can include “table treatment”, or hands-on manual therapy similar to physical therapy but more strength-focused, as well as exercise, Mark said.

A focus of Mark’s career has been working as an athletic trainer with local hockey teams, initially working with the Stouffville Spirit after graduating, from 2009 to 2012, doing warm-ups, cool downs, as well as any required athletic training and therapy. And getting the players out on the ice on time.

“I do get called the team mom a lot,” she added with a grin. “I’m kind of the back-end manager who’s involved in their whole thing — which I love doing.”

The Spirit won a championship under her stint, as did the next team with which she worked, the York-Simcoe Express minor hockey team (OMHA 2016 champions).

She joined the Newmarket Hurricanes in 2017 and worked with them until the team was bought and moved to Milton, which she decided was too far to travel.

Next, she’s joining the Newmarket Redmen.

She has also worked with York University track and field and Canada’s men’s field hockey team.

Her success is based on the emphasis she puts on strength conditioning and extensive warm-up as key to preventing injuries, she said.

The year before she joined the Hurricanes, for instance, nine players missed time due to groin injuries. After implementing her regime at first season, groin injuries were reduced to two, she said.

In general, she added, working out has become ingrained in hockey and football, for players of all ages.

She currently works out of Matrix of Motion Fitness Studio on Stellar Drive in Newmarket.

As a personal trainer, she said her passion is encouraging people to reach new fitness goals.

“If someone isn’t injured, and they want to work out, you can really push their limits — and they maybe love it or hate it — and then when they accomplish it, they’re like ‘woah’. I love seeing that.”

She also appreciates the relationship and bond that forms with her clients.

One of her top tips for exercise enthusiasts and athletes is to support their body with recovery time, both mental and physical.

“Even if you’re an office worker and sitting all day long, coming home at night, take a break from the computer, and the phone, and do some counter positions and stretching,” she advises.

“We need to support the body we’re in, and not enough people are doing this these days.”

Mark is joining NewmarketToday as a regular columnist, and will be sharing articles and videos with advice and tips aimed at helping you stay — or get — fit and healthy.

“My mantra is ‘keep going no matter what’, whether it’s an injury or simply a lack of time,” she said.

Singer brings her summer country anthem to drive-in concert in Sharon
Aug 13, 2020 1:16 PM
Comments
We welcome your feedback and encourage you to share your thoughts. We ask that you be respectful of others and their points of view, refrain from personal attacks and stay on topic. To learn about our commenting policies and how we moderate, please read our Community Guidelines.