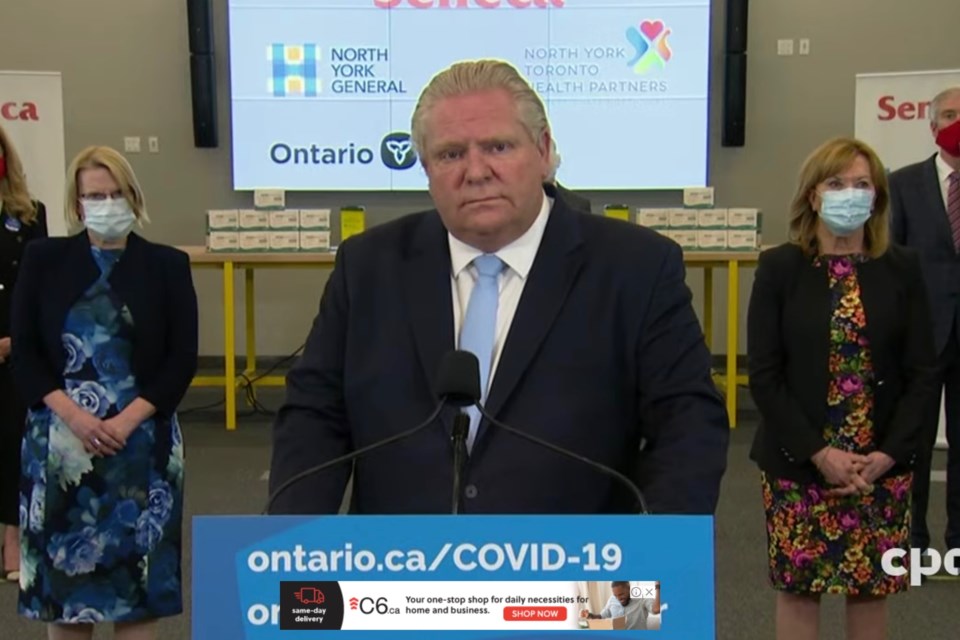 Less than a week after a third provincial shutdown was imposed, a state of emergency and another stay-at-home order have been issued.

The state of emergency takes effect immediately and the stay at home order is effective as of 12:01 a.m. Thursday, April 8, for at least four weeks, as the province pushes ahead with its campaign to vaccinate as many Ontarians as possible, particularly in COVID-19 hotspots, in a race against further spread of the variants of concern.

Variant cases are increasing at a speed beyond what was predicted by experts as recently as last week, he said.

This is the third state of emergency declared since the pandemic began in March 2020.

Mobile vaccination clinics will travel to the highest risk neighbourhoods, including workplaces, emergency housing shelters, mosques and community centres, to provide doses to residents age 18 and over, Ford said.

As hospital ICU capacity hits the highest levels seen throughout the pandemic across the province, non-essential retail stores will be closed and return to delivery and curbside pickup, by appointment, from 7 a.m. to 8 p.m. For the first time in the pandemic, big box stores selling food and drugs will be limited to selling only those essential items.

The order requires everyone to remain at home except for essential purposes, such as going to the grocery store or pharmacy, accessing health-care services (including getting vaccinated), for outdoor exercise, or for work that cannot be done remotely.

These changes are in addition to the emergency brake measures that took effect April 3 in all 34 health units across the province.

The province has reported more than 3,000 new COVID-19 cases per day since Sunday, with 3,215 new cases today.

In January, the second state of emergency was declared and a stay-at-home order was issued. Those measures were lifted in mid-February.

About the Author: Maija Hoggett