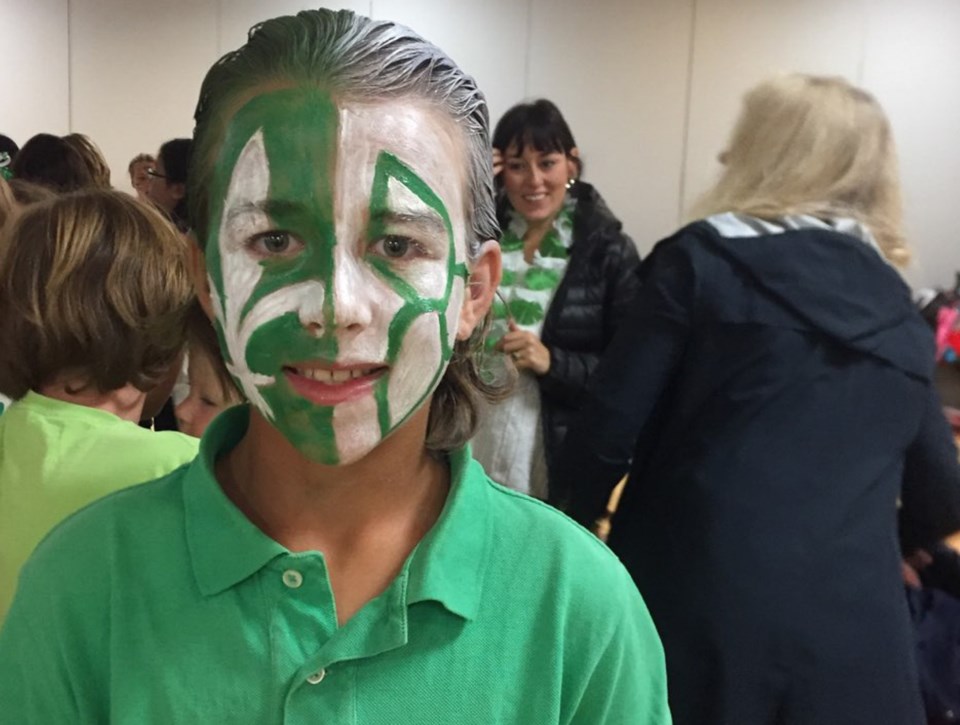 With his face painted in tribute to the flag, Augustin celebrates the raising of the Franco Ontario flag for the first time in Newmarket. Submitted photo.

The Town of Newmarket, along with 130 other communities in Ontario, celebrated Franco Ontarian Flag Day for the first time Tuesday, Sept. 25, 2018.

The event took place at Riverwalk Commons in the Lions Hall, due to inclement weather. Despite the weather, over 150 people attended the event. This was the first time that the Franco Ontarian Flag had been officially raised in Newmarket and it was an exciting day as those in attendance celebrated with other communities.

Franco Ontarian Flag Day was proclaimed in Ontario on Sept. 25, 2010 to mark the 400th anniversary of francophone settlement in Ontario. The date chosen was the 35th anniversary day of the raising of the original Franco Ontarian Flag at Sudbury University in 1975. The flag was designed by Gaeten Gervais, a history professor, and Michel Dupuis, a first-year political science student. The flag is green and white with a lily on the white representing Ontario and a fleur de lys on the green representing Franco-Ontarians.

Most exciting was the presence of Van Bemmell family and Madame Betty Durocher and family, who in 1975 witnessed the result of their hard work with the establishment of the first French-language school in York Region here in Newmarket.

One of the original teachers, Madame Anita Laprairie, shared some history with the us. The school was the initiative of Mme and M Posca. Betty Durocher was the point person in regard to documentation and finding space for the school. The Van Bemmells knocked on doors to build support, Charles Beer also had a pivotal role in making it happen.

In 1975, Madame Anne Wagner welcomed seven four-year-olds and nine five-year-olds to the first French-language class at the corner of Main and Ontario streets, to a catholic French school named Saint-Jean, at the time associated with St. John Chrysostom parish. By 1980, 215 pupils attended the school and 1982-1983 celebrated the first graduation class of students who had attended École St Jean for eight years.

A request for a new school was made in 1985. Eventually funds were available to build a new school officially named L’école Catholique Saint-Jean in Aurora. When mould had to be dealt with at the new school, Newmarket welcomed École Saint-Jean back to two temporary locations in Newmarket. One at 247 Main St. and the other at the location of where are now condominiums on Timothy Street, just west of Prospect Street.

Newmarket has a long history of partnership with Francophones in our community. Plan now to attend the Second Annual Newmarket Franco- Ontarian Flag Day celebration Sept. 25, 2019!

— by Sylvie Lessard and Patricia Montgomery

Steve Miller Band set to rock Casino Rama this summer
Feb 17, 2020 3:30 PM
Comments
We welcome your feedback and encourage you to share your thoughts on this story. We ask that you be respectful of others and their points of view, refrain from personal attacks and stay on topic. To learn about our commenting policies and how we moderate, please read our Community Guidelines.