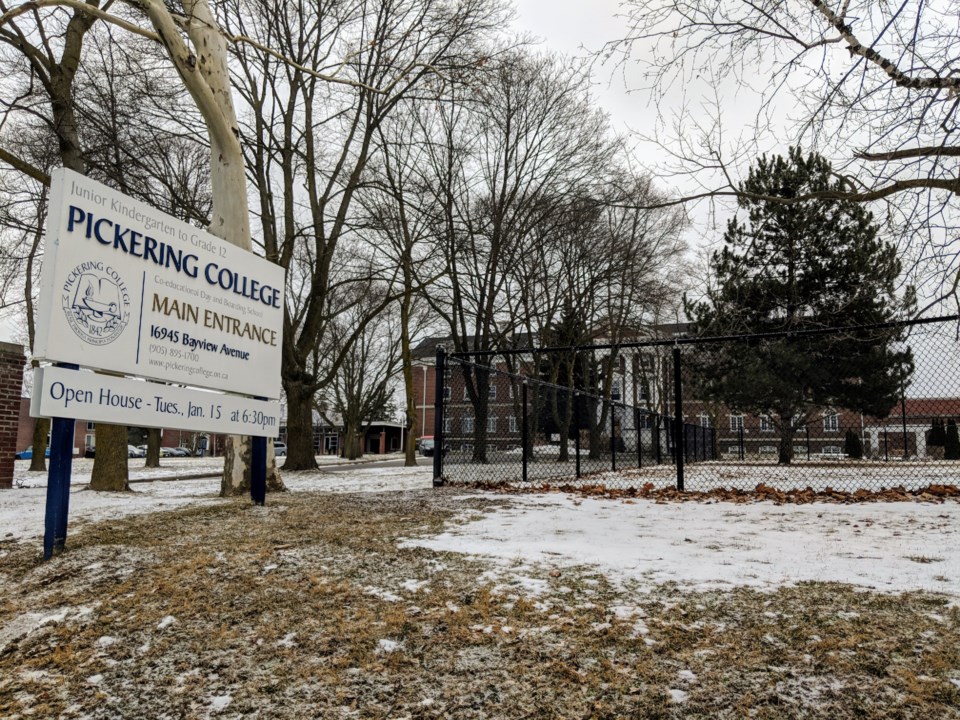 Pickering College, founded in 1842 as a Quaker school and established at its 16945 Bayview Ave. location in Newmarket since 1909, is an independent day and boarding school for boys and girls from Junior Kindergarten to Grade 12. Kim Champion/NewmarketToday

Nearly two years after a private school in Newmarket fired a female teacher over allegations of sexual relationships with two male boarding students, an Ontario College of Teachers discipline committee has found her guilty of professional misconduct.

Wilson was employed at the Quaker-founded Pickering College as a part-time teacher and lived on the Bayview Avenue campus as a supervisor of the school’s boarding school students from 2014 until she was fired Feb. 9, 2017.

The probe into Wilson’s conduct with two male boarding school students, who are identified only as Student 1 and Student 2 due to a publication ban, began in February 2017 when Student 2 confided in a trusted professional at the school, Pickering College headmaster Peter Sturrup said in an interview yesterday.

After the teacher’s swift dismissal, the school contacted both York Regional Police and the Ontario College of Teachers to report the allegations brought forward by Student 2 who, at the time, was 18 years old and in Grade 12.

York police investigated but did not lay any charges.

The teachers college launched its own investigation into the allegations and, on May 15, 2018, issued a notice of hearing to Wilson, which included the following:

From September 2015 to June 2016, Wilson had an inappropriate relationship with Student 1; allowed Student 1 to take a photograph of her naked body from her chin to her waist and; went camping alone with Student 1.

Between May 2016 and February 2017, Wilson had a sexual relationship with Student 1 while he was a student at the school.

Wilson did not retain legal representation and did not attend that hearing.

The discipline committee’s written decision and reasons, along with recommended penalties, are expected to be posted on its website within the next few months, a teachers college spokesperson confirmed.

“This event does not reflect our values, and we work very hard to make sure every member of our community acts in a way that reflects our values," headmaster Sturrup said of the school’s allegiance to its Quaker roots, ethics and morals. “We take this very seriously, and we also recognize that it shouldn’t have happened. It had an impact and may continue to have an impact on some of our students.”

Sturrup said he hasn’t heard any new concerns from staff, students or parents.

“I’ve received messages from parents and alumni who are supportive, who know the good work we do here,” Sturrup said. “And while we recognize that this was a serious event that reflects poorly on the school and put some of our students at risk, we have a lot of outstanding teachers here doing outstanding work, who put in a huge number of hours preparing the program and that’s who the school really is.”

Tuition for boarding students begins at about $63,000 a year, while day program rates start at $25,000 a year for the early years.

Sturrup, who has worked at the school since 1986 and has lived on campus as headmaster for the past 23 years, said he has been able to reassure staff, students and parents, that other than what the school knew about the events at the time, “no one else was ever put at risk”.

For about 15 years, the school has had a security system in place, with cameras on every door logging people coming and going, Sturrup said.

But since the events of 2017, the school has rolled out a number of enhanced training, safety and security protocols for its staff and students.

The school has modified its online monitoring system so students can check in and out of their residences electronically.

“At any given time, people who are supervising students can look online and see who’s on and off campus,” Sturrup said. “It allows for a much more effective means of monitoring, but in the event of an emergency, if a parent calls to talk with their child, we can track them down.”

As well, additional training around the issues of boundaries, responsibilities and appropriate use of technology is mandatory for all day and boarding staff and students, including a mid-year refresher for staff.

At the time Wilson was interviewed by the school in 2014, she had a local address with parents nearby, Sturrup said.

“As we do, and all public schools do, we conducted a thorough interview process, we do a vulnerable sector screening, and she got a clean screening check, we checked references and the (Ontario) college’s website, as well.”

According to the Ontario College of Teachers website, Wilson was listed as holding a Certificate of Qualification and Registration from July 31, 2014 until April 2018, at which time she was suspended for non-payment of fees.

Pickering College was Wilson’s first teaching job after graduating in 2013 with a bachelor of science degree and teacher’s certificate from Liberty University, the largest private Christian university in the United States based in Lynchburg, Virginia, and founded by the late Baptist televangelist Jerry Falwell.

Wilson was advised by the school not to contact staff or students at the time of her firing.

“I haven’t heard from her since the day she was terminated and I’m not aware of any contact,” Sturrup said.

Keep calm and check out these traffic calming ideas for Newmarket's Lorne Avenue
Feb 27, 2020 8:00 AM

Good morning, Newmarket!
Feb 27, 2020 6:00 AM
Comments
We welcome your feedback and encourage you to share your thoughts on this story. We ask that you be respectful of others and their points of view, refrain from personal attacks and stay on topic. To learn about our commenting policies and how we moderate, please read our Community Guidelines.