Escaping from dictatorship paves path to career as lawyer

In this week's What's Up Wednesday, meet Newmarket Main Street lawyer Carol Shirtliff-Hinds, who escaped with her family from a corrupt government in Guyana as a child
0
Sep 4, 2019 4:15 PM By: Debora Kelly 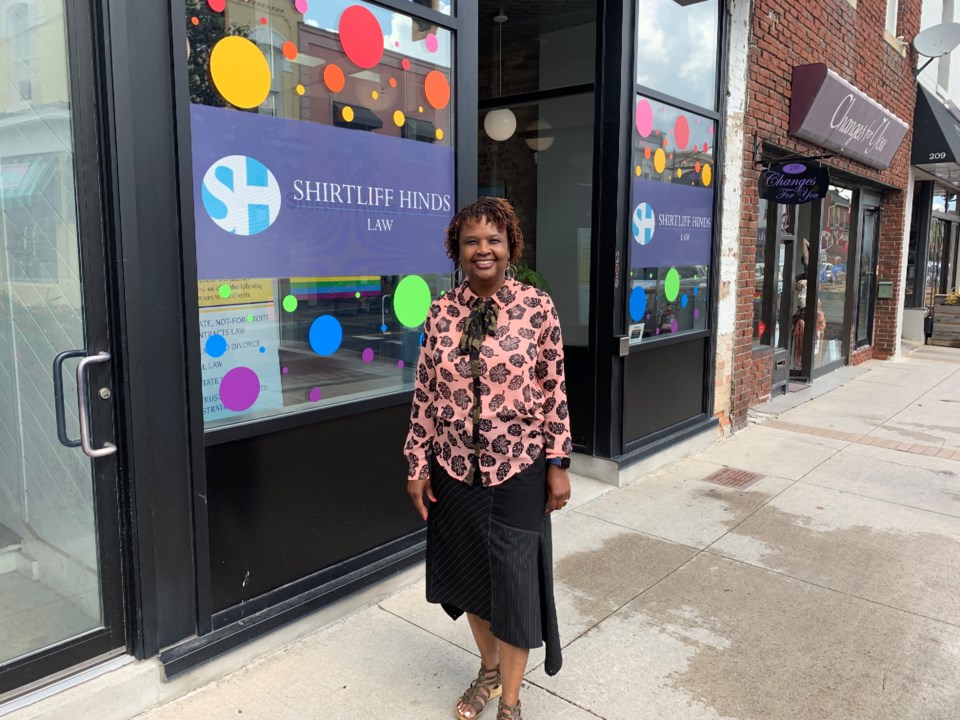 Little would she have thought about it at the time, but fleeing from a dictatorship in Guyana with her family as a child put Carol Shirtliff-Hinds on a path to pursue justice for others.

It was 1980 when then-prime minister Forbes Burnham ruled the small South American country with an iron fist, and her parents were determined to find a country that respected the civil rights of its citizens in which to raise their young family, recalls Shirtliff-Hinds now from her Main Street law firm in downtown Newmarket.

As a high-level employee of the government, her father was prevented from leaving Guyana under the travel ban the regime had implemented to halt the “brain drain” that had seen its brightest and most educated people, and their currency, leaving the country.

​”We knew our phones were tapped and that the government was listening to our conversations. No question, we were being monitored.

“People who went against the government just disappeared. No one ever said, ‘Whatever happened to so and so?’ We were terrified to even ask about that,” Shirtliff-Hinds said. “I thought, there must be something better than this. There wasn’t really any law per se, there was a lot of corruption. This always intrigued me.”

Leaving their belongings and home behind, the family bought return tickets under the guise of a vacation to Barbados.

“We couldn’t tell anyone that we were leaving. Though I did tell my best friend and I really had a lot of anxiety on the way to the airport, what if she said something?,” Shirtliff-Hinds said. “I felt guilty for years.”

Fate saw the plane diverted from its first stop in Trinidad due to bad weather.

“It flew directly to Barbados, which we found out in hindsight was a good thing, because by the time we left the country, the prime minister had found out about it, and he had ordered that the plane should be stopped in Piarco (Trinidad),” she said.

And while the family did escape, coming to Canada under the sponsorship of her mother’s sister, it wasn’t without a price, Shirtliff-Hinds said.

Her mother’s brother was jailed for several years and her grandmother was interrogated, she said.

The founder and principal of Shirtliff Hinds Law said, “I think all those things have an  impact on you. There are things we take for granted and maybe we shouldn’t.”

“We can all do something to correct injustice in the world. That’s why I wanted to become a lawyer, to give a voice to people who didn’t have one. I wanted to help people who could not help themselves.”

On arriving in Canada at the age of 12 in December, like many newcomers, she saw snow for the first time — but didn’t enjoy wearing the hand-me-down old coat she was given that wasn’t her style, she added with a laugh.

The family of five first lived with her grandmother in a one-bedroom apartment in Toronto.

“It was a little tight — it was kind of tough to study or do any work because you can’t get away from family,” she recalled. ”That’s when family gets real close.”

Her father struggled to find a job, however, her mother found work as a secretary at the University of Toronto.

“It was a stressful time for us because this was not the way it was usually done, and there were cultural aspects as well,” she said, about her mother being the family’s breadwinner. “It’s not done, but she did it and she supported us. I felt the stress of it.”

As a result, she said she drove herself to succeed at school, and helped to look after her two younger brothers, as well.

She was the first in her family to go to university — with her mother’s position at U of T providing free tuition — at the young age of 16 after skipping two grades at high school.

“It was kind of tough, it was a big age difference,” Shirtliff-Hinds said.

She initially studied French, and “dabbled” in different courses for five years at U of T, until attending the University of Ottawa Law School, graduating in 1993.

She worked for the government initially, and when her three children were teenagers, she started her firm in 2013 in Newmarket.

“I always try to make sure I’m there for them,” she said of her husband, a University of Toronto scientist, and children, now aged 21, 20 and 17, even if it means bringing work home. “It means you are always on.”

Shirtliff-Hinds is proud of her team’s diversity in gender, ethnicity, religion, sexuality, and nationality.

And when she talks about family, it includes her team at the office that supports her work as a litigator for the criminal, civil and family cases.

“Family is very important to me. If you’re a female and  a lawyer, it makes it even more difficult. You have a lot more responsibilities — as leader of a firm, as principal of Shirtliff Hinds Law, I have a responsibility to the employees, my clients, (as well as my) responsibilities to my husband and my kids.”

The Shirtliff Hind Law family also includes the community, with volunteering and giving back an important requirement for Shirtliff-Hinds.

As well as volunteering at Inn from the Cold and community events, the firm has sponsored York Pride and the Newmarket Music Festival.

“It’s a nice little community here. We all know everybody else,” she said of the Main Street location of her firm. “We’re all very supportive. We all have the same issues. I find the collaboration is just amazing, we’re very lucky to be here.”

Shirtliff-Hinds has always placed a priority on giving back by mentoring young lawyers, volunteering as a team coach in the mock trials organized by the Ontario Justice Education Network, and as a judge at DECA Ontario, an association of high school and university students, and advisers of business studies.

She keeps in touch with many of the students, who trust her advice and experience to guide them along the way, without judgment.

She is also one of the founding members of the Black Female Lawyers Association.

“I try to be a role model for others,” she said.

Her favourite quote, "Stand tall, reach as high as you can. Now, reach a little higher," by Marc Johns, speaks to her values — and, she admitted with a grin, her “perfectionist tendencies”.

When she’s ready to slow down a bit, she plans to indulge more in her hobby of travelling  — family trips have already included places like Beijing, Vietnam and Peru — with the Galapagos at the top of her bucket list.

“One day I’ll see those blue-footed Boobies,” she said.

Virtual reality bringing 'real' life experiences to Seneca students
Jan 25, 2020 12:46 PM
Comments
We welcome your feedback and encourage you to share your thoughts on this story. We ask that you be respectful of others and their points of view, refrain from personal attacks and stay on topic. To learn about our commenting policies and how we moderate, please read our Community Guidelines.