'Humans have been using the environment as a garbage dump for many decades, and that cannot continue. We must do better,' Jonathan Wilkinson says
Nov 2, 2020 5:38 PM By: Alan S. Hale 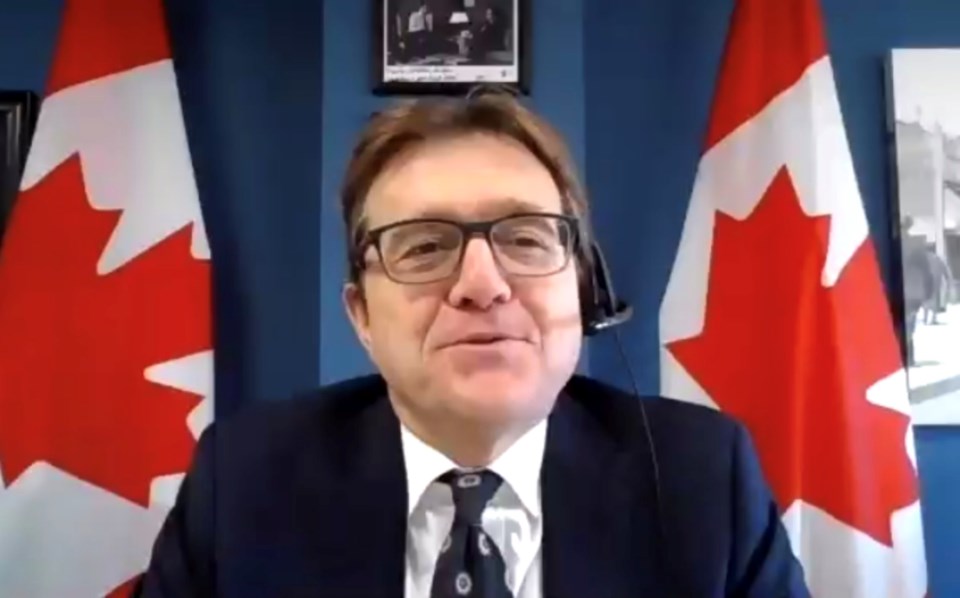 When students from Moraine Hills Public School asked the federal environment minister Jonathan Wilkinson how much longer the world had before it was too late to undo the environmental damage of climate change, his answer for them was blunt: it already is too late. But he also told the grade-schoolers there was still time to make changes to avoid more destruction.

"We must take bold action now," he declared. "We must take steps in Canada to stop the decline of biodiversity, and the same thing is true of plastics.

"Humans have been using the environment as a garbage dump for many decades, and that cannot continue. We must do better."

Wilkinson took the students' questions during a digital town hall Oct. 30 hosted by Newmarket-Aurora MP Tony Van Bynen, who had invited his fellow Liberal MP to talk about the government's plans to rebuild the economy by "growing back green."

Participants asked the environment minister about everything from federal environmental policies to local priorities and initiatives.

By the end of the hour-long session, Van Bynen said he felt the meeting could lead to more cooperation with the local government on environmental issues.

"I'm hoping this discussion becomes a conduit for discussion between Newmarket, Aurora and the Ministry of the Environment, where we can explore the potential benefits of new environmental programs," said the MP.

But the meeting didn't provide some local environmental advocates with what they had been hoping to hear.

Former Newmarket-Aurora federal Green Party candidate Walter Bauer was disappointed the question he had submitted beforehand about Canada's track record on reaching its emission reduction targets wasn't asked. He told NewmarketToday Wilkinson came across as "well-spoken" and "informed" but he found the government's policy positions to be lacking.

He said there was far too much focus on the pandemic and reducing plastic use over climate change, and that the minister had skirted tough questions on the oil and gas sector.

"I walked away disappointed and angry," said Bauer.

Speaking to Minister Wilkinson, Newmarket Mayor John Taylor applauded the federal government on its decision to ban single-use plastic products, noting the issue is also a priority for the town council.

The mayor spoke about Newmarket's own environmental initiatives, such as a home retrofit program with local contractors and its use of natural features in the municipal stormwater system.

Taylor said he would like to see more support for York Region's goal of electrifying its entire transit fleet.

"As a mayor and a regional councillor, you have to focus on the areas of greatest return and impact in our sphere of influence, and I think that is getting those transit fleets electrified more quickly," he said.

"We have a pilot project of four electric buses in Newmarket now, but the rest of the electrification plan is not as fast as it could be, in my opinion."

Phasing out of fossil fuel subsidies

Wilkinson responded that Canada had agreed with other G20 countries to phase out oil and gas subsidies by 2025, but said what counts as a fossil fuel subsidy needs some explanation.

"Typically what is meant by folks like me are subsidies meant to incentivize the exploration and production of fossil fuels. Those are the things we should be phasing out, there's no question," said Wilkinson.

"But there are also things where there is more of a debate. For example, some of the funds we could spend to help the oil and gas sector to reduce their emissions. That, in my mind, is not a fossil fuel subsidy."

Bazos told NewmarketToday that she was very unhappy with the minister's comments, calling it a "non-response."

"I have to say I’m disappointed. In saying that our government will work with the other G7 countries to reduce emissions, he sounded like a Republican across the border. Canada can be a leader in promoting and transitioning to green energy," she said.

"Our consumers are split on the adoption of this behaviour, and it would be an easier fix for business if a mandate was issued. I have confidence that other solutions would become more competitive if there was ban as part of the green recovery," read her submitted question.

Wilkinson responded the government doesn't plan to ban plastics more broadly, because plastic as a material has too many beneficial uses. It banning everyday items that are too expensive and inconvenient to recycle, including straws, plastic utensils, six-pack rings and shopping bags, he said.

The plan is also to require a higher percentage of recycled plastic for other uses and for producers to pay for the cost of recycling — legislation Ontario is already implementing.

Wilkinson said the federal government would like to see net-zero standards adopted as part of regular building codes for residential, commercial and industrial projects by 2030. But that would require provincial governments to agree.

"The federal level can develop a national building code, but it needs to be adopted by each province," he said. "We are working with the provinces and territories on a model building code, with the intention of all of them putting it in place."

Support for the local conservation authority

The CAO of the Lake Simcoe Region Conservation Authority, Mike Walters, said he agrees with the federal government's position that investing in green infrastructure is the best way forward for Canada. With that in mind, he asked the minister if there will be additional funding for the conservation authority and if the money would be available for land acquisition.

"We wouldn't be acquiring lands just to hold them; the purpose would be to restore wetland, prairies and forests that would increase biodiversity habitat," said Walters.

Wilkinson said support for natural infrastructure would be part of a major new environmental and economic plan that the government is currently working on and will be released in the near future.

As for land acquisition funding, he noted that money was provided into the Nature Conservancy of Canada for that purpose.