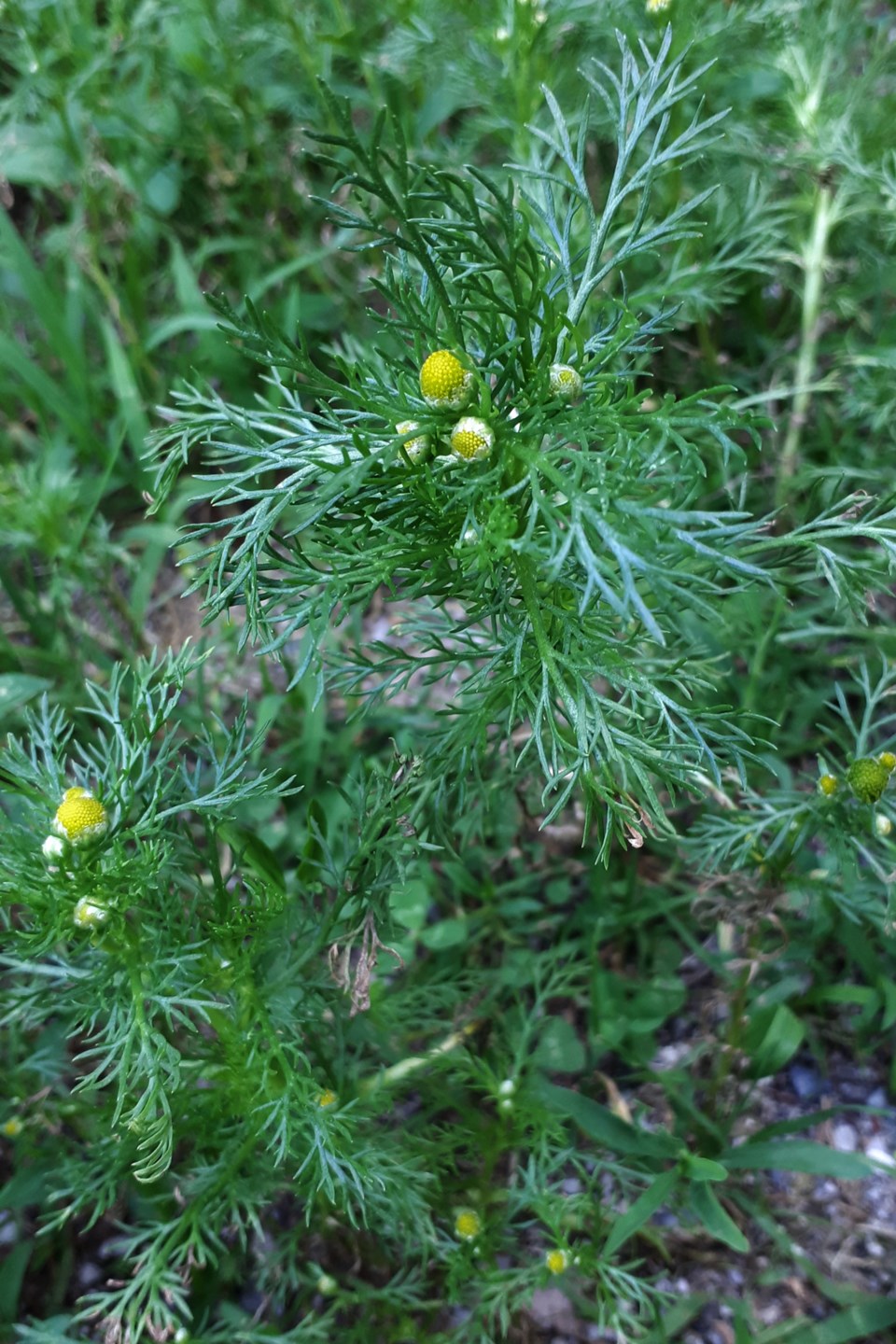 There is no mistaking the pungent odour of the pineappleweed. David Hawke/OrilliaMatters

As outdoorsy people, we are all no doubt aware of how important our five senses are to us: sight and sound especially for birdwatchers; touch and taste are essential to herbalists and those with a wild food culinary bent; yet we sometimes take the sense of smell for granted.

Our noses certainly let us know when a skunk has stopped by, or when you've just walked through a patch of wild mint, but other than these types of billboard-sized aromas, our sniffer is usually regulated to being just an alternative way to bring air to our lungs, a task undertaken about 23,000 times a day.

While perusing a stack of books in my room that have been bought over the years for the express reason of expanding my literary horizons (although for a multitude of very good excuses have not yet been read), I came upon a most interesting one published way back in 1990 (the book stack is, ahem, very high).

In her book, A Natural History of the Senses, Diane Ackerman addresses each of our five senses in detail, examining how they enhance our experiences of the biological world around us.

Ackerman's chapter on the sense of smell deals with the biology and history of scents and noses; from the theory of the evolution of the nose developing before the brain, to the intimate relationship of Napoleon and Josephine over the scent of violets.

While I found the whole book entertaining and insightful, one passage really struck home: "Smells detonate softly in our memory like poignant land mines, hidden under the weedy mass of many years and experiences. Hit a tripwire of smell, and memories explode all at once. A complex vision leaps out of the undergrowth."

This thought was well illustrated recently as Julie and I were berry picking.

We had returned to the car that was parked on a gravelly area of a farm lane, and as we stood beside the car, depositing our precious load of berries, we both were transported back to the summers of our youth. Not because of the act of berry picking, but because of the pungent aroma which rose up from the crushed plants beneath our feet.

There is no mistaking pineappleweed using either the visual sense or the olfactory process.

Small in stature with lacy leaves and greenish-yellow flower buds, the crushed plant releases a strong, acrid odour. It tends to grow in disturbed soils where it can get a lot of sunlight.

Closely related to chamomile, a tea made from these small flower buds makes for a pleasant and relaxing pause in the day.

Julie remarked how the fruity smell reminded her of the summer holidays spent at her grandmother's farm… the hot, lazy days of vacation rolling by as farm animals and gardens were tended to, and spare time was for swinging under a shady maple tree.

Similar thoughts were jumping to my mind, as I too had the pleasure of staying on relatives' farms for summer vacations.

The distinct aroma of pineappleweed immediately took me back to the barnyard of my uncle's farm, where my cousins and I played for hours amidst the killdeers, barn swallows, cow pies, and giant brown grasshoppers.

How vivid are the memories, now almost 60 years old, of the games of cowboys and gunfighters who chased each other down in a roaring blaze of "Bang! Bang! I got ya! Did too! Ya gotta fall down!" Then, as we rolled in our best stuntman death throes, the wet sap from the cushion of crushed pineappleweed would permeate our clothes, our noses, and our memories.

A few years later on, we were expected to actually help with the haying; gone was the unlimited free time for rip-roaring around the barn. As wagons loaded heavily with hay bales pulled up to the elevator, the tires would crush hundreds of stems and leaves and that familiar acrid scent would once again fill the air.

All this and more flash through my mind as Julie and I pause for a moment by the side of a farm lane.

How many farm lanes have I walked down in the heat of a summer's day, orange butterflies fluttering around fresh cow pies, tall goldenrods leaning in from each side?

Some trips down the lane were to take drinking water to those working in the fields, others were to round up the cows for milking time, and several walks took me on an evening patrol of the fields as part of a groundhog management program (although that's not what I called it back then).

I can't actually count them all, but I know each outing is locked somewhere in my memory like a secret code, the key to their opening perhaps being held in a few particles of odour drifting within a warm August breeze.