Chefs with Hart was inspired by Hartley Bernier, a 10-year-old living with a rare and serious illness called Intestinal Failure
Jul 23, 2019 7:34 PM By: NewmarketToday Staff 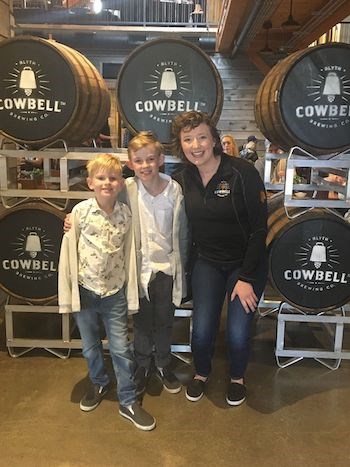 NEWS RELEASE
COWBELL BREWING CO.
*************************
Cowbell Brewing Co. is pleased to announce they are partnering with Chefs with Hart for two fundraising events to benefit the GIFT (Group for Improvement of Intestinal Function and Treatment) program at Sick Kids Hospital.

Chefs with Hart was inspired by Hartley Bernier, a 10-year-old living with a rare and serious illness called Intestinal Failure. Since his initial diagnosis, Hart has had more than 20 operations, spends 14 to 16 hours on an IV daily and must consume more than 4,000 calories to continue thriving.

He, along with his brothers, Hudson and Sully, are Sick Kids ambassadors and actively promote and raise funds for Sick Kids Hospital in Toronto. Together with their parents, Daniel and Ashley, they formed Chefs with Hart.

Prior to the GIFT program’s inception in 2002, children like Hartley only had a 30 per cent chance of living past three years old. Since their inception, they have worked hard to make a difference for families dealing with some of the rarest, and most complex illnesses seen in hospitals today.

Children with Intestinal Failure previously experienced 40 to 80 per cent mortality rates, and with the GIFT program, those rates have been reduced to 5 per cent. The GIFT program at Sick Kids is the only program of its kind in Canada.

Chefs with Hart creates culinary-inspired events with chefs from across Ontario to bring awareness to Intestinal Failure in children and raise funds for the GIFT program. To date, Hartley, Hudson, and Sully have raised almost $60,000 for the GIFT program and have been awarded the 2019 Impact Award from The SickKids Foundation and The WE Foundation.

“As a family, we are very excited to be putting on an event involving so many incredible chefs, and we are beyond grateful to do it with such a generous partner as Cowbell Brewing,” said Daniel Bernier. “The boy's grandparents make their home in Huron County, and we are excited to host many friends and family from the Huron-Perth area in Blyth.”

“We are thrilled to be partnering with Chef with Hart, a Greener Pastures Champion,” said Alecia Anderson, director of community engagement at Cowbell Brewing. “The boy's enthusiasm is infectious and their commitment to being advocates for Sick Kids is inspiring.”

The tapas-style dinner at the Cowbell Farm will feature dishes created by talented chefs from Stratford and Toronto, including:

A second tapas-style dinner will be hosted at Eventmrkt in Newmarket on Aug. 11, 2019, featuring dishes from:

To buy tickets to the Newmarket event, click here.

York police K-9 unit helps locate suspected cannabis shipments at Pearson Airport
Jul 16, 2020 11:41 AM
Comments
We welcome your feedback and encourage you to share your thoughts. We ask that you be respectful of others and their points of view, refrain from personal attacks and stay on topic. To learn about our commenting policies and how we moderate, please read our Community Guidelines.