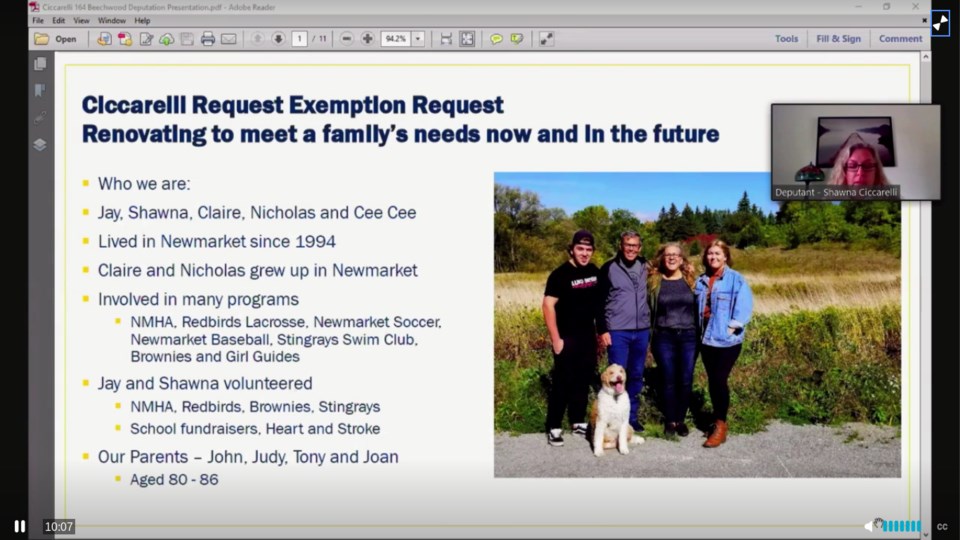 A longtime Newmarket family's bid to build an addition onto their downtown home was rejected by council at its June 22, 2020 meeting. Screenshot

The delay of a comprehensive study to guide infill development in Newmarket’s established neighbourhoods has inadvertently ended up pitting neighbour against neighbour as homeowners seek exemptions from a temporary ban on most renovations.

The COVID-19 pandemic put a stop to a planned April 2020 public meeting that would have concluded the established neighbourhoods study and drafting of new policies and zoning guidelines for new home building on single or vacant lots, and additions to existing homes in established and emerging areas in Newmarket.

On Monday, 10 written deputations were submitted from neighbours both in support of and against an application from a downtown Beechwood Crescent homeowner to renovate the home by adding a proposed second story and rear addition that would nearly double its square footage and take its height from 15 feet to 24 feet.

The proposed renovation would not be out of character for the neighbourhood, a town staff report said, which is comprised of both moderately sized and large, one storey, one-and-a-half storey and two-storey dwellings.

Those against the application included Beechwood homeowners Janet Caverly and Steven Sugar, who said the street has already had "a large amount of tree canopy removed by past infill construction".

On the other hand, nearby Park Avenue neighbour Beric Farmer wrote in support of the project, saying, "I am concerned about potential long-term impacts if it becomes increasingly difficult for homeowners to renovate and improve their properties.

"In opposing such projects, the set of potential outcomes are not either what the homeowner wants or what those opposing the homeowner want. If a homeowner is unable to proceed with their plans, the property may ultimately end up falling into disrepair, being vacant for long periods of time, or having other similar negative outcomes."

The applicant and longtime Newmarket resident Shawna Ciccarelli, who spoke on behalf of herself and husband Jay, said the family has always wanted to live in the downtown core and bought the home in January 2020. The deal closed in April during the height of the COVID-19 pandemic.

“The home is in need of updates, and especially now with what has gone on in the long-term care facilities, I don’t think anyone is comfortable with having their parents in an assisted-living home until things can be safer for them,” Ciccarelli said, adding they want the extra space, in part, for their aging parents.

The pandemic has also necessitated the need for extra home office space as the couple anticipate working from home for the foreseeable future due to the coronavirus crisis.

The Ciccarellis distributed a letter to nearby residents and those further afield about their plans, designed the addition to respect all current bylaws, and addressed neighbours’ concerns, including trees, building height, the home’s footprint, and the project’s duration.

A town staff report recommended the Ciccarellis’ application for exemption be approved, but many on council didn’t agree.

Councillor Bob Kwapis, in whose ward the Ciccarellis live, said he received numerous calls from constituents who have already been impacted by the development in the area of Yonge and Eagle streets.

“This area is sensitive to changes, and the problem is the neighbours have dealt with a tremendous amount of change, through good and bad,” Kwapis said. “To my frustration, this established neighbourhoods study hasn’t come forward, and we’re facing an extension of the interim control bylaw once again, which creates a tremendous amount of friction. Now, it’s neighbour against neighbour.”

“The ultimate outcome is the community, at this moment, doesn’t have specific guidelines of what can or can’t be done in that community,” said Kwapis. “I have no choice but to say no to this application because we have no guidelines.”

Conversely, Councillor Victor Woodhouse argued that staff recommended the renovation be approved, and that council had in the past approved a number of other site-specific exemption requests.

“In this case, they’re looking to add their own parents, to simply make the current building larger to accommodate that, and to me, it’s appropriate,” Woodhouse said.

Mayor John Taylor said when the town put the exemption process in place, it wasn’t meant for a project of that scale.

“Since it’s meeting considerable support and opposition, I think that means it’s contentious enough and it deserves protection of the interim control bylaw,” Taylor said.

At least three other homes on Beechwood have undergone significant additions in recent years.

The established neighbourhoods study aims to identify the unique character of Newmarket’s many neighbourhoods and recommend planning policies that complement and are compatible with existing streetscapes.

The Ciccarellis hoped they would be able to complete their addition by December 2020. But now, they face up to a one-year delay in creating the space they say their family needs now and in the future.

Newmarket council voted 6 to 3 against the exemption request. Councillors Woodhouse, Grace Simon, and Trevor Morrison voted in favour of the application.