Town of Newmarket to be first in York Region to approve a so-called vibration bylaw
Mar 24, 2019 8:30 AM By: Kim Champion 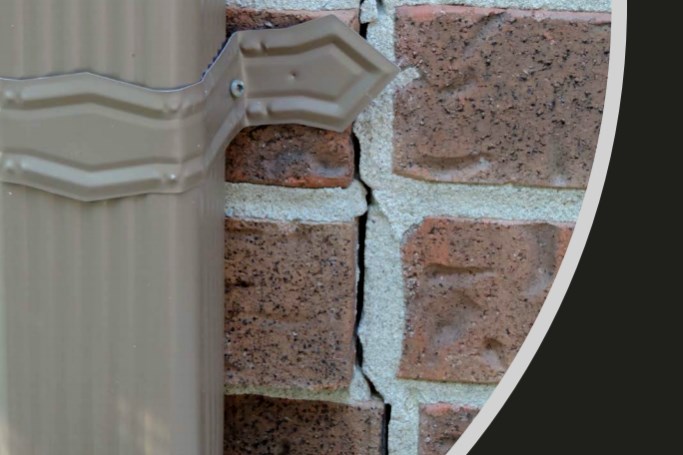 A home on Harrison Drive suffered crack bricks due to nearby construction vibration. Supplied photo/Gordon Prentice

Unlike the Beach Boys' song of the same name, some Newmarket residents are not feeling the ‘good vibrations’.

A contingent of Harrison Drive residents, whose homes back onto the parking lot of the Canadian Martyrs Catholic Elementary School on London Road, say they’ve suffered cracked bricks and other damage to their homes due to the construction vibration that came from heavy machinery in summer 2018 when the York Catholic District School Board did work at the school property.

Speaking on behalf of the neighbours at a committee of the whole meeting Monday, longtime Newmarket resident Gordon Prentice said he and fellow Harrison Drive homeowners are left holding the bag on repairs since insurance companies do not cover any earth movements, either natural or man-made, such as earthquakes and vibration from construction equipment.

“There was heavy machinery within yards of the property line, tractors, rollers, and huge machines to scrape concrete off the earth and all of them generated vibrations,” Prentice said, who writes a blog about politics in Newmarket. “But the real problem came when they brought in machines to compact the aggregates, and we were given no warning whatsoever about this.”

Prentice said the machinery generated “huge shock waves” felt by homeowners, who experienced window panes rattling and crockery jumping about on the table. Some of the outside bricks cracked on his own home, Prentice said, and the construction noise and dust that wafted into his backyard often prevented enjoyment of the space.

“Personally, I’m concerned that my neighbour has a 35,000-gallon swimming pool, which is spitting distance from where the construction zone was,” he said. “I do think a vibration bylaw is needed and it should be brought in absolutely without delay. The school board contractors must comply with all applicable bylaws, so if there was such a bylaw in place, then all contractors would have to follow it.”

Newmarket is the first municipality in York Region to consider implementing a so-called vibration bylaw after receiving numerous complaints and concerns related to vibrations caused by nearby construction activities.

In a seven-page staff report to council, senior planner Dave Ruggle wrote that “construction activities such as soil compacting, excavations, and moving heavy machinery can cause ground-borne vibrations, and where these activities are undertaken near existing developed areas, they can physically be felt by people and minimal movement of structures can occur. If these vibrations reach a significant level, structural damage may occur on neighbouring buildings.”

To combat that and the possible disputes that may arise between developers and residents, the proposed new bylaw would mandate that an assessment is done before any construction activities begin to determine a “zone of vibration influence” that would identify the area surrounding the site that may be affected by vibrations.

Glenway community liaison group member Bob Hansen, who has lived in the Crossland Gate area of Newmarket since 1991, said he, too, has been concerned about the strong vibrations caused by large earth movers and, in particular, by powerful earth compactors which produce vibrations over a significant distance.

“It is very expensive for a Newmarket resident to litigate for damages caused by adjacent development,” Hansen told council. “The staff report should be the basis of a good vibration control bylaw, with the recognition that vibration issues caused by renovation and maintenance projects would protect residents. Pass this as soon as possible in 2019.”

Hansen’s property is near the Marianville development in the Glenway, where various types of homes east of Crossland Gate may be completed this year, while planned houses directly behind his home may not be built for some time depending on the real estate market, he said.

“We would like to see several vibration monitoring devices behind our homes, which are immediately adjacent to the pending heavy site work and we will be in touch with the developer and town staff to request that the monitors be utilized to record vibration levels and to ensure they do not exceed established and recognized maximum levels and to share the results with homeowners,” Hansen said.

Councillor Christina Bisanz, in whose ward the Glenway housing developments are located, said she has been advocating for a vibration control bylaw for about the last three years when her constituents first started experiencing the effects of vibrations from the Marianville development in west Newmarket.

“My concern is, spring is coming, and there are a number of significant construction initiatives that are going to start that wouldn’t have been subject to a (vibration bylaw) because the work is already approved,” she said, adding that there’s a sense of urgency to have the bylaw also apply retroactively to approved developments. “I think this is going to be another example of Newmarket taking a lead in an area where we want to be responsive to the needs of developers, but also responsible in terms of the needs of residents, particularly in areas where there’s significant infill activity in the community.”

“We’re looking at two ends of the spectrum, everything from jackhammers, like a friendly rental that somebody took out and it’s affecting the neighbour and cracking the drywall, to another extreme where we dealt with an older, established home (downtown) where there’s a whole new development, and that home had a rubble foundation. The developer went over and above and did an inspection, but we can’t count on that goodwill. We do absolutely need to have a bylaw that will not only look at the new developments but also how do we deal with existing developments within our area and the vibrations.”

To address the issues of impact of construction vibration on properties in proximity to development, town staff recommend that a process be put in place for new development proposals that require a report from a qualified professional identifying a zone of vibration influence and recommending a course of action to ensure existing residents in the vicinity of the activity are adequately protected through the use of notices, pre-construction surveying and monitoring.

Similar to Toronto, town staff propose the following process regarding providing notice to residents and handling vibration complaints: At least one week prior to the commencement of construction activity that may cause vibrations, the applicant (developer) will notify the ward councillor, staff and owners and occupants of properties within the zone of influence of the scheduled construction activity.

The notice will include:

In addition, council directed staff to investigate how it could capture existing development sites where construction activity will cause significant vibrations.

The revised draft vibration bylaw is expected to come back to council for approval as early as April.

VIDEO: You will find much more than just coffee at Metropolis Mercantile
Aug 10, 2020 4:00 PM
Comments
We welcome your feedback and encourage you to share your thoughts. We ask that you be respectful of others and their points of view, refrain from personal attacks and stay on topic. To learn about our commenting policies and how we moderate, please read our Community Guidelines.