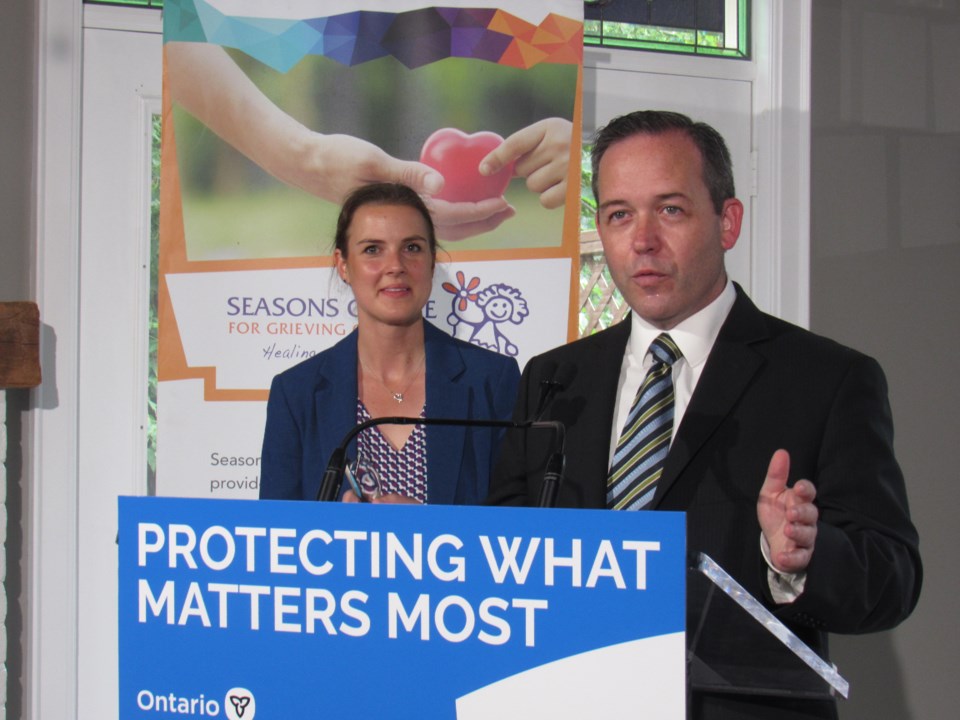 Attorney General Doug Downey, who's the MPP for Barrie-Springwater-Oro-Medonte, and Barrie-Innisfil MPP Andrea Khanjin announced the elimination of provincial fees on charitable break-open tickets during a news conference on Friday, July 19, 2019 in downtown Barrie. Shawn Gibson/BarrieToday

Attorney General Doug Downey announced today that the provincial government will be making it easier for charities to help those who need it most.

At a news conference at the Seasons Centre for Grieving Children on McDonald Street, the Barrie-Springwater-Oro-Medonte MPP announced that the provincial fee applied to the sale of break-open tickets (also commonly known as Nevada tickets) will be eliminated, allowing more money to go to the people who need it.

“This is a really big announcement for anyone who not only relies on the money from a charity, but also for those who give and want to ensure their money is going directly to where it is needed most," Downey said.

Events that utilize the loittery tickets are a substantial source of funding for many charitable organizations throughout the province and are licensed by the Alcohol and Gaming Commission of Ontario (AGCO). The tickets can be also found at many malls and stores.

In 2017-18, the provincial fee on the sale of break-open tickets cost charities approximately $4.7 million.

Downey said that money can now be used more effectively in the community.

“Our own community has countless charities that operate solely on the giving of others," he said. "Now fees will not get in the way of everyone benefiting.”

BEYOND LOCAL: Can Canada can do better prepare to retrain workers displaced by disruptive technologies?
Jan 26, 2020 8:55 PM

Horse racing got 'a wake-up call', says Belinda Stronach
Jan 26, 2020 5:06 PM
Comments
We welcome your feedback and encourage you to share your thoughts on this story. We ask that you be respectful of others and their points of view, refrain from personal attacks and stay on topic. To learn about our commenting policies and how we moderate, please read our Community Guidelines.

Shawn Gibson is a staff writer based on Barrie
Read more