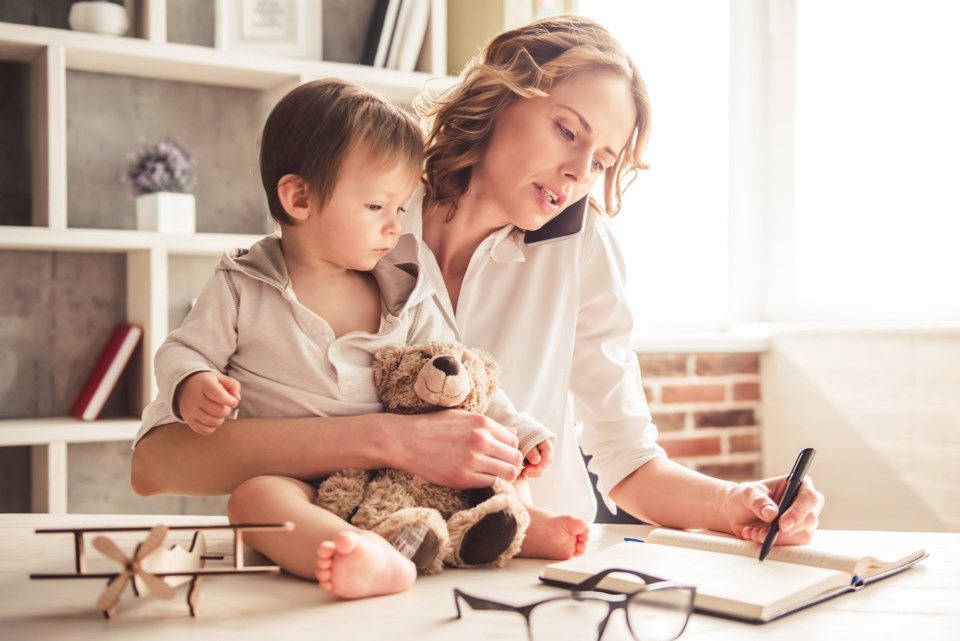 TORONTO — Canada's workforce has tilted in favour of men during COVID-19 as the pandemic has pressured women's dual roles as mother and employee, says a new Royal Bank report.

More than 20,000 women left the workforce between February and October, while about triple the number of men joined it, said the study released Thursday.

The pandemic and the demands of raising children are likely the cause of the exodus, which is seeing women between ages 20 and 24, along with those between 35 and 39, abandoning work faster than most other cohorts.

Some of them are returning to school to pick up new careers and skills, while others are shifting to rear children. The study said mothers with children under six only made up 41 per cent of the labour force in February and yet, they account for two-thirds of the exodus.

Dawn Desjardins, RBC's deputy chief economist and the report's co-author, said this pattern could slow down the economic recovery from the COVID-19 pandemic and impact the future of industries largely dominated by women.

"We need to see women come back into the labour market in order to ensure that our economy can hit the stronger growth rates as we go forward," she said.

Desjardins and co-author Carrie Freestone are particularly worried because a high number of women who have lost their jobs during the pandemic are not temporarily laid off and don't appear to be looking for work like their male counterparts.

They say this could be happening because women are more likely to work in industries slower to recover from COVID-19 restrictions, their ability to work from home may be much lower than men because they dominate the hospitality, retail and arts sectors, and they often take on more onerous responsibilities associated with raising kids.

"Things are not getting tremendously better at this stage, so they may have just temporarily opted out of the labour force while they try to figure out what they're gonna do next," said Desjardins.

"Also we have seen a reduction in capacity for daycares and so for women who are working and have young children that also seems to be playing into this."

These trends are largely impacting women with children under the age of six, while those with kids between the ages of six and 17 seemed to be heading back to the workforce, said Desjardins.

Older women might not be leaving the workforce at the same rates, but they are being impacted too, said Vandana Juneja, the executive director at Catalyst Canada, a non-profit encouraging the advancement of women in the workforce.

"If there's a tough conversation to be had oftentimes these are being given to women to have during this time of crisis," she said.

She pointed to a September study from McKinsey and Co. and LeanIn.org that said senior-level women are much more likely than men at the same level to feel burned out, under pressure to work more and “as though they have to be ‘always on.’”

They are also 1.5 times more likely than senior-level men to think about downshifting their role or leaving the workforce because of COVID-19 and almost three in four cite burnout as a main reason.

Meanwhile, the pandemic has delivered some wins for men. RBC's report said the surge in demand for e-commerce caused the scientific and technical services industry to hire 55,000 workers, and three-quarters of those positions were filled by men.

This could be happening because women have traditionally been under-represented in science, technology, engineering and math careers, but it's unclear whether the trend will continue, said Desjardins.

Of the 48,000 workers in the retail, accommodations and food services industry who lost their jobs in October, Desjardins said about 80 per cent were women and they accounted for nearly twice the share of the decline in labour force participation when compared with men.

Earlier in the year, Desjardins authored a report that said the pandemic has pushed women’s participation in the labour force down to its lowest level in three decades and is a stark contrast with prior recessions, where men were much more likely than women to be laid off.

Such findings are concerning, but not surprising, Juneja said.

She feels they highlight why it's so important for companies to practice empathy and offer flexibility that's not just centred around hours.

That means having policies that can accommodate those looking after children or elderly or ill family members.

"We know there's no silver bullet solution to greater equity in the workplace, but there are a number of things that companies can and really should be doing  during this pandemic."

This report by The Canadian Press was first published Nov. 19, 2020.

Companies in this story: (TSX:RY)