Central York Fire Services crews faced a series of challenges in putting out the massive fire May 14
May 22, 2020 3:31 PM By: Kim Champion 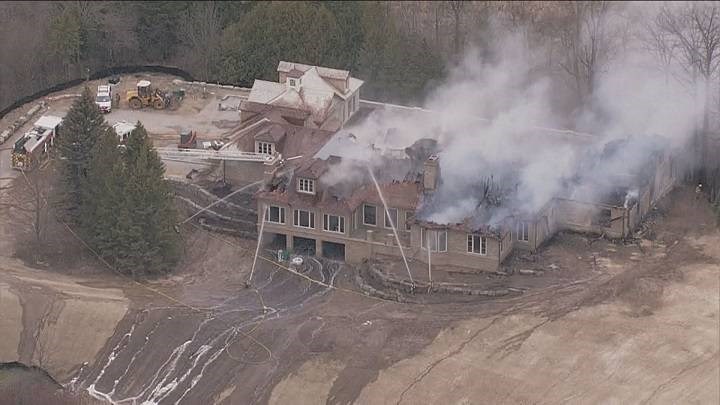 Central York Fire Services Chief Ian Laing said the owners of the 9,000-square-foot mansion were readying to move in when it was destroyed in a May 14 fire. Kimberley Fowler/Global News photo

Now that the smoke has cleared on one of toughest and most complex fires that Central York Fire Services has fought in years, Fire Chief Ian Laing said his heart goes out to the property owners who had expected to soon move into the high-end mansion newly built on a rolling 37-acre property on St. John’s Sideroad East in Aurora.

On May 14 at 3:47 a.m., the local fire department was called out to 130 St. John’s Sideroad, a property known locally as the McKenzie Marsh, near Yonge Street. It features an 1,182-foot frontage, a quarter mile of driveway up to the house, and a 16-acre man-made pond.

When fire crews arrived, the blaze in multiple parts of the approximately 9,000-sq.-ft home that was still under construction was well-established, Laing said.

“The crews reported smelling the smoke as far north as Savage Road in Newmarket. The smoke had been drifting up that way for a while and they noticed it there,” said Laing. “The assistant deputy chief who responded as the senior officer on call said he could see the flames from Green Lane and the 404.”

From the outset, firefighters were deployed around the large structure and were battling the blaze on three sides of the building in an effort to contain it.

“This was a very significant fire with regard to the fact it was a very large house and its location,” Laing said. “It was a tricky area to be working in, it was under construction so the water coming out of the house made the whole front hill like mud, it was difficult to move the hoses and people through that.”

Throughout the night and into the next day, two shifts of firefighters worked to snuff out the massive fire.

The volume and intensity of the fire demanded a defensive strategy and a high volume of water. Three hydrants were tapped, including one on the property, and an additional two located to the east and west on St. John’s.

One fire truck hooked up to the hydrant on the property and pumped it up the long driveway to the aerial truck and engine stationed outside the home. Additional pumpers hooked up to the nearby hydrants and relayed the water to the first truck that ensured a steady flow to the scene.

A Town of Newmarket mechanic was called in as the fire trucks were running low on fuel.

“The crew did an amazing job of trying to contain the fire and stop it, and the challenge was great,” Laing said. “They never gave up. We did a shift change, brought in a fresh crew early in the morning, but the previous crew battled it from 4 a.m. until about 9 a.m., and that crew continued all the next day.”

“I’m very thankful for the level of service these firefighters provided because they work hard in the most difficult situations,” the chief said. “Based on the fact they were working so hard and it was a tough fire, we were lucky to get through it without any injuries.”

The house was unoccupied at the time of the fire and no injuries were reported.

Central York notified Ontario’s Fire Marshal, as it is obliged to do in any large-loss fire, Laing said. An investigator from the fire marshal’s office was reportedly at the scene throughout the day on May 14.

The Office of the Fire Marshal and Emergency Management consulted on the fire but did not launch an investigation, a spokesperson confirmed.

The cause of the fire is unknown at this time.

“It’s truly a shame there was an incident there and I have to say my heart goes out to the folks that I met who owned the property,” Laing said. “They’d been three years building this project and were supposed to move in in 30 days. They’re quite upset, they’re probably extremely upset.”

The new home is likely a teardown due to the fire, Laing said.

“I know firefighters had to use heavy machinery to access the back of the building because of its location, and they had to knock down some walls that had been burned badly and were unstable,” said the chief. “Then they got the equipment in to continue to open the building up so they could finish extinguishing the fire in any hidden areas.”

Parts of the building were significantly damaged in the blaze, Laing said, including what appears to be all of the living space.

“Portions of the building weren’t damaged as badly because there was a fire separation between one part of the building and the other,” he added. “The facade that you can see from St. John’s is probably the most intact piece of the building.”

At the peak of the fire, Central York had six trucks, one command vehicle, 28 firefighters, one platoon chief and two chief officers at the scene. The local service worked in collaboration with York Regional Police, York Region Paramedic Services, Alectra, Enbridge, the towns of Aurora and Newmarket, Ontario’s Environment Ministry, and the Office of the Fire Marshal.

Firefighters from Richmond Hill and East Gwillimbury were also on the scene.

“(The fire) presented many challenges and we’ll learn lots from it, but unfortunately this great house isn’t there anymore,” Laing said.

On a general note, Fire Chief Laing reminds all residents who have been staying at home more often to help slow the spread of COVID-19 that cooking remains the number 1 cause of fires in residential properties.

“We’ve been doing some heavy education regarding cooking, as everybody’s home more, experimenting and cooking more because they can’t go out to eat,” Laing said. “But you’ve got to remember: stand by your pan.”

VIDEO: House fire closes St. John's in Aurora (UPDATE)
May 14, 2020 1:00 PM
Comments
We welcome your feedback and encourage you to share your thoughts. We ask that you be respectful of others and their points of view, refrain from personal attacks and stay on topic. To learn about our commenting policies and how we moderate, please read our Community Guidelines.