'Almost too good to be true': Newmarket's housing market in midst of white-hot streak

"I am not advising my clients to consider this like the stock market because if you do, you always lose. I've seen people try to cash in in 2017, and now we are at the start of another mountain,' says one local realtor
Mar 30, 2021 8:00 AM By: Alan S. Hale 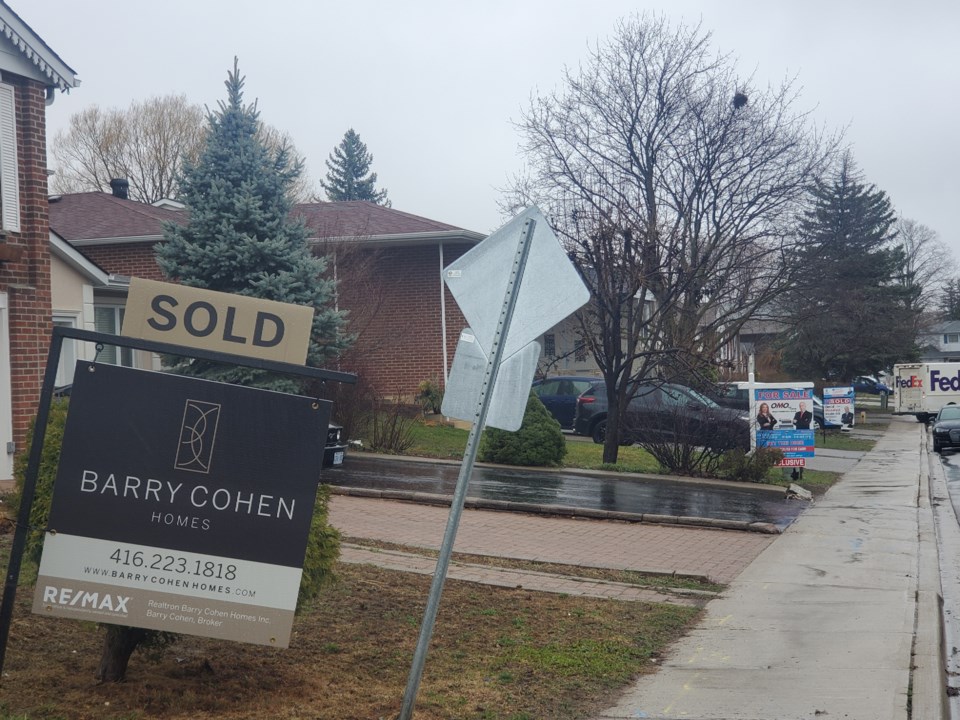 Three houses for sale on the same side of the street on Thomas Crescent.Alan S. Hale/NewmarketToday

A combination of low interest rates and a desire to move out of the city centre during the COVID-19 pandemic has created a white-hot housing market in Newmarket where sellers are getting between 20 and 40 per cent over asking price.

Homeowners have noticed, and houses are going up for sale all over town with many being snapped up in just a few days.

David Harris and his wife recently sold their home in the popular College Manor neighbourhood, across from a public school, for $1.38 million, about $80,000 over the asking price. He said they didn't even take the highest bid, opting instead to accept the offer from a young family.

"It was very easy, we sold it for a good price and are very happy ... We listed on Friday, had a few showings on Saturday, and it was sold by Saturday. It felt almost too good to be true," he said.

They had initially planned to sell their home later in the spring, as they had already purchased a new house under construction in Alliston.

"The way the market was going, we thought we should take (advantage of it). We are lucky enough to have a cottage, so we are going to live there awhile," Harris said.

"I wouldn't want to be a buyer in this environment, and I certainly don't want to rub anyone's nose in the fact that we got such a good price," he added.

Buyers in Newmarket to be prepared to pay well over the asking price.

"The market is very difficult for buyers but excellent for sellers. I really feel for young buyers right now who are putting in anywhere from six to 12 offers. I've been telling them if you can't go over asking, you should stay out of the market," said Betty Durocher, broker, Royal LePage RCR Realty.

Durocher said the last time the real estate market was this hot was the boom in 2017. Prices have jumped approximately 20 per cent this year, when in a typical year, they might go up by five per cent. She said one home behind Upper Canada Mall sold for 40 per cent over asking price.

Some local realtors are advising caution for anyone looking to make an easy profit from their house.

They are also cautioning any sellers who might be tempted to jump into the market to make a quick profit on their homes. It doesn't make sense to sell right now and then turn around and try to buy another home in the same hot market.

"The only people I can see taking advantage of this is early movers who are going from the Greater Toronto Area to places like Halifax or somewhere else," said Joshua Campbell, broker, Knowledge Broker Real Estate, Coldwell Banker.

"It's all relative. I am not advising my clients to consider this like the stock market because if you do, you always lose. I've seen people try to cash in in 2017, and now we are at the start of another mountain."

While Harris and his wife had a cottage as a place to land after a sale, not everyone has that option. Even the idea of selling a home and then finding a place to rent for a while is much more difficult than it may appear, as Jennifer Buchanan found out when she and her family sold their home for $1.41 million after a day of showings, $146,000 over asking price.

"There is part of me that feels like it's too good to be true," she said. "But it worked perfectly. But then we were sitting there the next night thinking, 'wow, we sold our home, now we need to figure out where to go.' This had been a 'let's give it a whirl and see what happens' decision; we hadn't planned out what to do."

Buchanan has property in Novas Scotia, but the family decided they wanted to stay in Newmarket, so they began looking for a place to rent, which turned out to be harder than they thought.

"We quickly realized there is a renting boom going as well as a buying boom. There were multiple offers on rentals just like for houses, and I did panic a little," she said. "But we found one in downtown Newmarket, and we are ecstatic."

So what is causing prices to skyrocket? There are some different theories.

Durocher noted that the climb in prices across Ontario really began last summer and has been steadily creeping upward ever since. She believes that interest rates on mortgages are so low that it has encouraged a large number of people in Toronto to get out of their downtown condos after a year of working at home and are ready to pay almost any price to do it.

"With people working from home, the travel to the city is not as much a problem either."

Campbell, on the other hand, believes what is happening can be explained by normal supply and demand in the market. The demand for homes has remained constant; what changed during the pandemic was the supply.

"During the pandemic, people were not selling their houses and staying put. They weren't able to get contractors or other services to prepare homes for sale so that all kept supply low. So now we have a flurry of overactive buyers who are paying anything because there is this feeling the economy will pick back up after the pandemic," he said.

"It could be the beginning of a boom. Especially if the foreign buyers come back after the country opens back up again, this might just be a ripple."