Council is reviewing the transportation implementation plan to try to find a compromise between cyclists who need bike lanes and homeowners who need on-street parking
Feb 23, 2021 12:45 PM By: Alan S. Hale 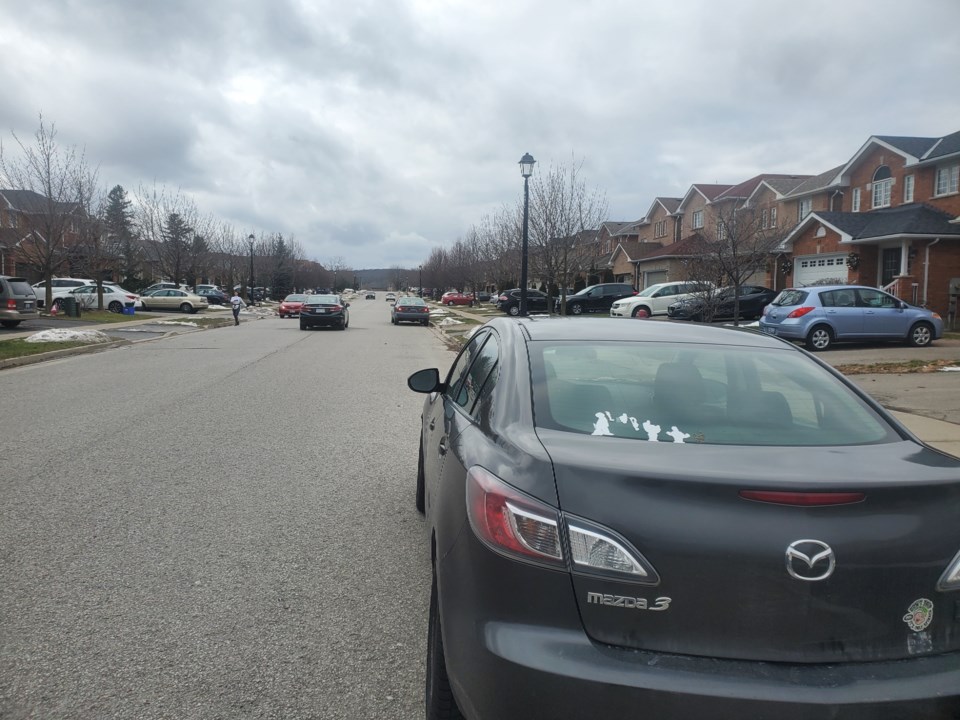 Cars parked along the side of Clearmeadow Boulevard in Newmarket on Dec. 14. Alan S. Hale/NewmarketToday

New bike lanes that were planned for 2021 are being put on hold, almost certainly until next year, because of a clash between homeowners and cyclists.

According to Newmarket's active transportation implementation plan, bike lanes were to be constructed on Clearmeadow Boulevard, William Roe Boulevard and Lorne Avenue this year. Although the Lorne lanes will go ahead, the other two will not, as council looks for a way to resolve the conflict between cyclists who want the new lanes and homeowners who do not.

"I think we have had enough streets or communities who have been concerned and upset that it behooves us to look into any options for doing things differently," said Mayor John Taylor at a council meeting Monday.

Council decided it will review the transportation plan to make sure the placement of the bike lanes still makes sense and to find possible compromises to address homeowner concerns. Staff recommended that councillors participate in a workshop to explore those issues in detail, but the earliest that could happen is in the fall.

This doesn't mean the bike lanes are being cancelled, but the delay means they will most likely have to be started next year.

"This does slow down the process but doesn't eliminate the process. We are not trying to get away from the (transportation plan), we are just trying to review it," said Councillor Kelly Broome.

The conflict that spurred this decision is the lanes proposed for Clearmeadow, where residents are upset that they would lose access to on-street parking, which they need for guests and other situations where driveways are not sufficient. Meanwhile, cyclists want the lanes to go ahead as planned to make it easier to get around town.

The Town of Newmarket already delayed approving the bike lanes in December in response to a petition from residents. But on Monday, they heard directly from representatives of both sides of the debate.

"The loss of on-street parking is a major concern," said Mina Abbas, a neighbourhood resident. "The majority of residents on the street are families and multiple car owners who frequently depend on on-street parking, not just for guests, but also for their immediate family on a daily basis.

"This is has left us wondering where guests, residents and service vehicles are supposed to park."

David Kempton of Cycle Newmarket, meanwhile, argued that the streets belong to everyone and that cyclists need the dedicated lanes.

"Please keep in mind that Newmarket streets belong to all of us, the street is not the property of the people who live on it. Most people do not have on-street parking in front of the house," said Kempton.

"The balance you are being asked to provide is between the personal safety of cyclists and a desire for on-street parking — an inherently dangerous practice.  Clearly, the balance must fall heavily toward bicycle safety."

All of the cyclists who spoke at the meeting talked about the need for lanes to help ensure that people on bicycles are safe from vehicle traffic.

"We hear about a war on cars. Well, if there is a war on cars, why is it cyclists and pedestrians providing most of the casualties?" asked Paul Jolie, a cyclist.

Council found itself torn between the two sides with no readily apparent way to address their needs.

Councillor Christina Bisanz argued that a simple compromise of allowing some on-street parking while still installing the bike lanes might be the answer. Parking alcoves could be built into the side of the road, to reduce the danger of cyclists hitting car doors that open in front of them.

Councillor Bob Kwapis was the one to propose delaying the bike lanes so the plan can be re-examined to see if any circumstances had changed since it was adopted in 2018 that would suggest alternatives that had not been considered.

"That way we might be able to ease some of the pushback and friction I see on the bike lanes," he said.

Councillor Jane Twinney was skeptical that much would have changed in less than three years. She noted that the town had spent a lot of time and money creating the transportation plan, and that the plan had gone through extensive public consultation before it was adopted.

Council decided to go ahead with the delay, and staff will present options on how to proceed with a review, including a workshop in the fall. But staff did ask that the Lorne paths be allowed to continue because of how critical they are to the overall design for Newmarket's active transportation system.