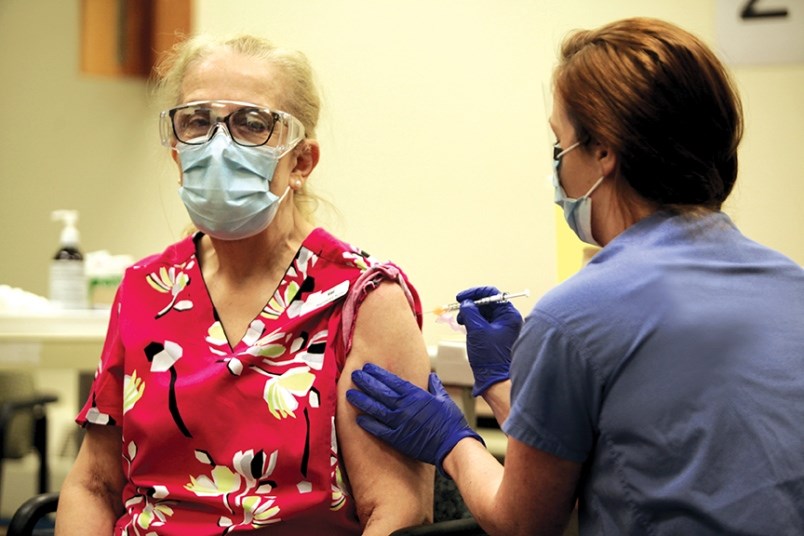 Christmas was always going to be a difficult time for residents of retirement and long-term care homes unable to spend the festive season with their families. For individuals living at Aurora’s Kingsway Place Retirement Residence, the season was especially challenging as they were declared in an active COVID-19 outbreak situation on Christmas Eve.

The outbreak, which York Region Public Health closed on Tuesday, Jan. 19, ultimately took the lives of three residents and, this past Friday, there was a much needed dose of “relief” and “elation” as residents and staff received the COVID-19 vaccine.

Kingsway Place was one of several retirement and long-term care residences across York Region to receive the Moderna vaccine last week.

“The safest place for our residents was their suites and when the vaccine rolled in on Friday of last week, it has been tremendous because it has given people the sense that as a little more time goes past, they are getting some level of safety against the virus and that has been huge for people,” says Ray Barlow, director of operations for Fieldgate Retirement Living.

“There was a lot of elation, families were extremely happy, residents were incredibly relieved. York Region did a tremendous job bringing in the paramedics. They were on site, the family doctor was here, Southlake was here, and York Region Public Health nurses were on site, so there was a real show of force to come in and get the job done quickly and efficiently. They all worked extremely hard and gave a lot of confidence to our residents that they were on the road to safety.”

Barlow praises staff for their response to the outbreak, noting that not one of the caregivers left once the outbreak was declared. In fact, many stayed nights at the residence to pitch in to combat the outbreak.

“That tells a real story and I think that is a testament to the staff at Kingsway,” says Barlow.

“These are places that the majority of the outbreaks have been happening and these are the places where about two-thirds of the deaths have been experienced in York Region have occurred,” he said. “As more and more vaccine becomes available, we’ll be moving into other groups, but we have to work very closely with the province to ensure equitable distribution of vaccines across the Province.”

That being said, the delivery of the Moderna vaccine to retirement homes has been temporarily stopped by York Region Public Health to “re-allocate the Pfizer vaccine to homes in an effort to hold back a second dose for long-term care home residents, staff, and essential caregivers who received a first dose of Moderna,” according to Patrick Casey, director of corporate communications for York Region.

“As such, the remaining doses, 2,190, are being held back as second doses for those in long-term care and retirement homes who already received the first dose,” said Casey on Friday. “Immunization with Pfizer is ongoing in retirement homes and will be continued over the weekend and on Monday. Some catch-up of long-term residents, for example those not able to receive the vaccine at previous visits due to being COVID-19 positive or consent not provided by substitute decision-makers were done on Saturday, Jan. 16.”