At a pandemic anniversary, Mayor John Taylor reflects on the successes, challenges and pivots — some that that will be long-lasting — for himself, the municipality and the community
Mar 16, 2021 9:06 AM By: Alan S. Hale 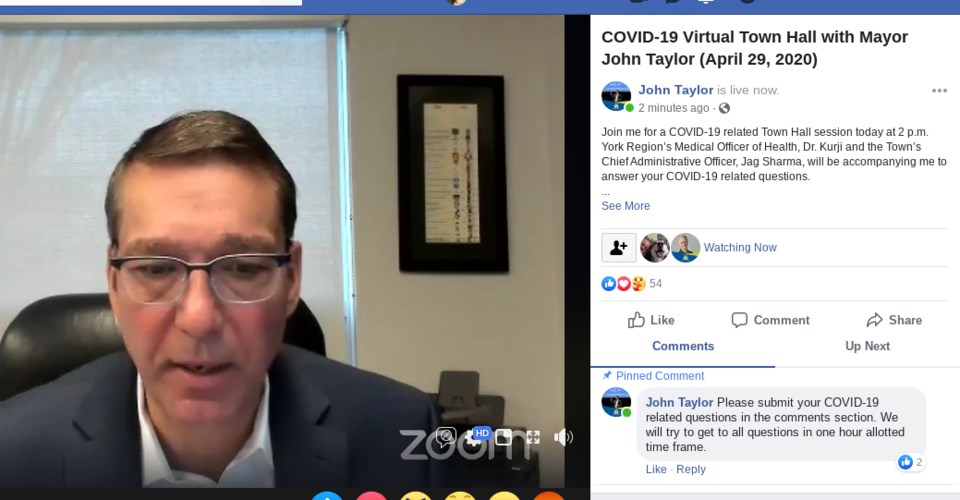 Today, it will be one year since the first York Region resident was admitted to the intensive care unit at Southlake Regional Health Centre, and for the past 12 months, Newmarket Mayor John Taylor has found himself leading the community during a time that is unprecedented in living memory.

Reflecting on the past year, Taylor said he has been proud to see the resiliency, strength and compassion the people of Newmarket have shown during difficult times.

"I could give tons of examples of this, but if you look at the amount of things both the town and the people have done during COVID-19, you would have thought this was going on for five years because there's no way all of this could have occurred in one year —  but it did. There have been so many things that have occurred that were spectacular, special and challenging," he said.

"What stands out to me really strongly was the drive-around parade to show support for frontline workers. I remember doing it, and being completely moved by what a powerful display it was."

"Then there were the positivity ambassadors. They were 50 people from the community who are still going strong trying to lift people's spirits. It's pretty incredible stuff."

Having the first global pandemic in a century was certainly a curve ball for the Town of Newmarket and other municipal governments across Canada.

Taylor said the pandemic forced a new way of thinking and doing things on the municipality. Offices had to be closed, meetings held online, different ways of operating its facilities, while staff took on new job descriptions, he said — and it hasn't always been an easy transition.

"I look forward desperately to getting back to whatever normal is," he said.

"But I think it shows you that we can keep this town moving forward, and continue to work on key projects and work on communities even under something as impactful as COVID-19, which I think is pretty amazing. It shows how good our team is."

There will be some long-lasting changes at the town even after the pandemic is over, said Taylor.

One of the things that is likely here to stay is remote participation in council meetings and other municipal events, said Taylor. Having meetings online has made it easier for the public to engage, and that is something that should be encouraged.

"We have had some unbelievable community participation on issues like the Mulock farm that were all online, and it worked brilliantly. We have had employees calling in for key meetings, sometimes as much as 70 kilometres away, and it didn't take away from anything while improving their quality of life and being better for the environment," the mayor said.

"I don't think everything will operate that way in the future, but I think it will be much more accepted as an option. Now that we are so comfortable with it, it will help us engage with the community and reach people who might not have come out for a physical meeting to sit in the audience."

The other lasting impact, Taylor predicts, is how much more nimble the municipality has become in making and implementing decisions or setting up new programs. This was done out of necessity to keep up with a  rapidly changing situation, but Taylor said it has shown the municipality that it is possible.

"We set up a business support program, changing rules around parking on Main Street, and set up vaccination in three days. What it teaches you as a government is that we can move quicker than we think we can if the need demands it," he said.

"I think there will be this expectation now that government can be responsive and more nimble."

Outside of municipal offices, Taylor believes having the shared experience of going through the pandemic will also have long-lasting impacts on the Newmarket community.

The pandemic may shift community values by showing just how important it is to support not only each other, but the community organizations and businesses that make life in Newmarket possible.

"We hear so much at a distance about the importance of homeless shelters and food banks, but now more than ever, the work they do has been put front-and-centre, and we see they play an incredible role in the community,"

"Shopping local and supporting local businesses is here to stay, as well. People get it now more than ever they need their community to survive in this hyper-competitive online world.

"Honestly, I also think there is a renewed sense of respect and even acceptance of the role of government in making sure communities are strong and safe."

On a personal note, Taylor admitted that being mayor during a pandemic has been "very hard."  There are many more people struggling far worse than himself, he recognized, but the job of leading the community through such times has been difficult.

"It's rewarding though, too. You get to participate in the community and help with these amazing responses. But I have seen my email and phone inboxes grow exponentially with messages from people who are afraid, desperate and angry. Not all of them, but many of them are and with good reason," he said.

"So it's been a lot of high emotions and negativity that you are funnelling. You try to be understanding and try to support them, and I am trying still to get them the help they need," he said.

"It's also been tough to be so far removed. Before, I was out at events four or five nights of the week talking to everyone face-to-face and meeting with my council. Lots of people feel socially isolated, and I am there on that extreme, I feel like that constantly, every day."

"It's been hard to keep that sense of connection."