Newmarket's Terry Fox virtual run lets you do it your way 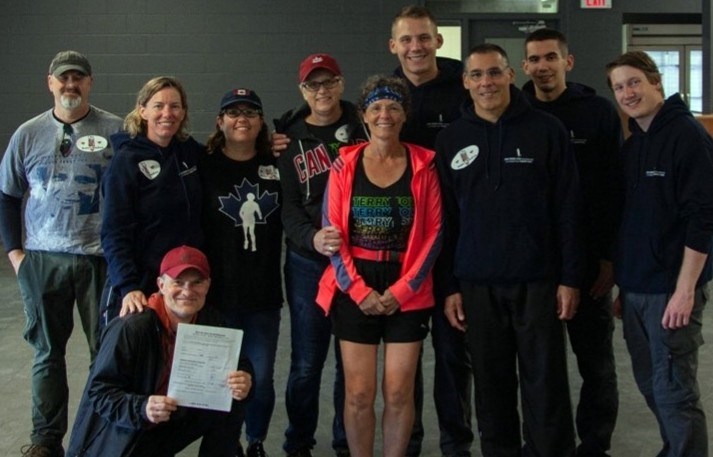 “It’s got to keep going without me,” the late iconic cancer research activist Terry Fox said, not long after the athletic amputee was forced to suspend his then-143-day Marathon of Hope in 1980 as the disease spread to his lungs and sent him to hospital.

This September, on the 40th anniversary of Fox’s East to West fundraising journey that began in St. John’s, Newfoundland, and covered 5,373 kilometres before ending in Northern Ontario, his wish will prevail — despite the public health crisis caused by COVID-19.

The Newmarket Terry Fox Run will take place as usual on Sunday, Sept. 20, except this year it will be a virtual event.

Instead of the community meeting up to set out on a planned route, participants are encouraged to do their own thing in their own way on that day, at a location of their choosing.

The mission remains the same, however, and that is to raise awareness and funds for cancer research.

With many in the community still struggling with reduced work hours, layoffs, and catching up on bills even as Ontario begins a gradual reopening of the economy after a near-shutdown for two months, Lee anticipates fundraising challenges.

The Newmarket run last year raised just shy of $68,000 and organizers hope to raise a little more in 2020 in honour of the 40th anniversary. Since launching in 1994, the annual Newmarket Terry Fox Run has raised more than $1 million.

Those fundraising efforts will get a push this time around from Adidas Canada, which this week released the $130 Orion Terry Fox 40th anniversary running shoes that sold out within minutes. All proceeds go to the Terry Fox Foundation.

Meanwhile, registration for the Terry Fox Run opened May 20 and the Newmarket organizing crew is quickly pivoting to come up with new ways of reaching out to the community with its local fundraising via social media.

It won’t be kicking off its fundraising at Newmarket’s Canada Day event as it has always done since all in-person celebrations have been cancelled at least through the summer. But details are being worked out for some online events this summer to boost donations.

But participants themselves can fundraise and donate online as in years past.

“In talking with our great organizing crew, that’s what we’ll miss, it’s the face-to-face contact with the community, that whole community feeling when people are laughing and crying, that sense of family that Terry has brought to us 40 years later,” Lee said. “We’re still all in this together.”

“When you hear the stories of people walking for loved ones who have passed, or even people that are there as survivors, we’re all just one big community across Canada all on the same day doing this for Terry Fox,” Lee added.

Here’s what you need to know about the 2020 Newmarket Terry Fox Virtual Run:

Register as an individual, family or team as usual under the Newmarket Run site here where you can also donate or sponsor a participant.

On Sunday, Sept. 20, you are encouraged to lace up your running shoes and head out the door at a time of your choosing. You can walk, run, roll, blade or bike around your neighbourhood, backyard, at your favourite outdoor space or trail, for instance. You can even dance it out on your driveway if that’s the most comfortable place for you.

Share your photos and videos of participating in the virtual run on social media.

Visit Newmarket Terry Fox Run on Facebook to stay up-to-date on virtual fundraising events and more leading up to the national event.

“It’ll be different this year, but people can still come together virtually as a community, participate, and cheer each other on safely from their porch,” Lee said.

YMCA and Food Bank team up to handle influx of donations
May 26, 2020 4:00 PM
Comments
We welcome your feedback and encourage you to share your thoughts. We ask that you be respectful of others and their points of view, refrain from personal attacks and stay on topic. To learn about our commenting policies and how we moderate, please read our Community Guidelines.