Layoff of nurses at Southlake, use of private clinics draw ire of health-care advocates 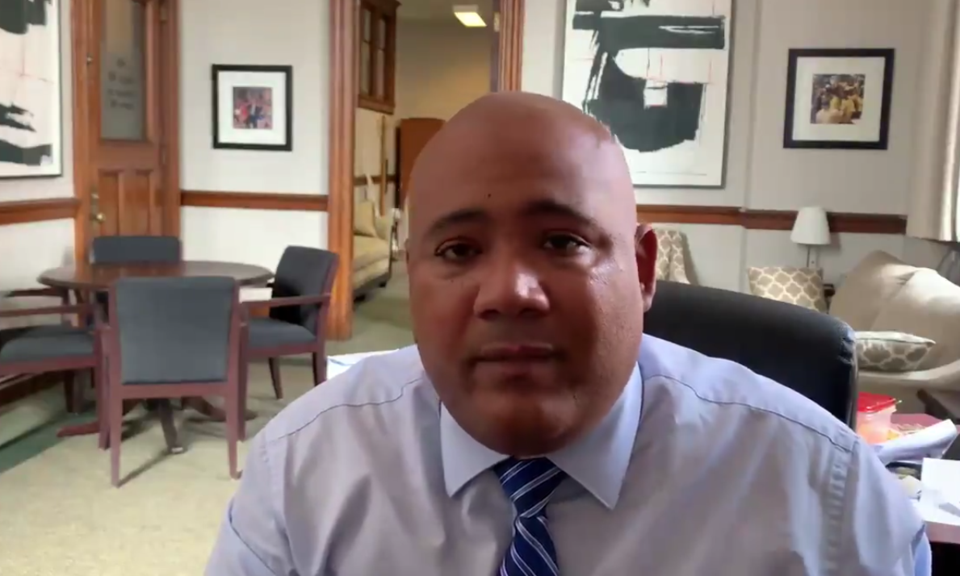 In a video posted on social media today, Liberal MPP Michael Coteau called on Health Minister Christine Elliott to explain why nearly 100 nurses are being laid off in her Newmarket-Aurora riding during a pandemic.

Liberal MPP Michael Coteau today came out swinging against the Ford government during Question Period, accusing it of trying to privatize health care through the “back door” by suggesting payment to private medical clinics to help clear the surgery logjam created by the COVID-19 pandemic, a leaked document obtained by the CBC shows.

Coteau, who represents the Toronto riding of Don Valley East, also took aim at Newmarket-Aurora MPP and Health Minister Christine Elliott after it was revealed this week that nearly 100 registered nurses will be cut from Southlake Regional Health Centre due to budget constraints.

In a video posted from the Ontario legislature just after 1 p.m. on social media, Coteau said he asked Elliott about a leaked document that suggested the government was going ahead with privatization of health care in Ontario, and also about the nearly 100 nurses being laid off in Elliott’s riding during the COVID-19 pandemic.

“Earlier this week, we found out that (nearly) 100 public-sector nurses were laid off in the Minister of Health’s own riding. How could the government lay off nurses during a pandemic where staff shortages are forcing people to wait eight hours for a COVID-19 test?” Coteau said later in a news release.

“Now that we have this leaked report to connect the dots, it seems likely that this privatization could already be underway,” he added. “As we enter the second wave of this pandemic, can Premier (Doug Ford) confirm that no more health-care workers will be fired?”

On Tuesday, the Ontario Nurses’ Association called the Newmarket hospital’s decision to lay off the frontline health workers “completely irresponsible”. Union president Vicki McKenna said the cuts amounted to the loss of 176,000 hours of direct patient care that would “devastate the Newmarket community”.

Southlake officials defended the layoffs, saying the hospital is facing significant financial challenges similar to other hospitals in Ontario, and its own “substantial deficit” is unrelated to COVID-19 and predates the pandemic.

“These changes are aligned to the broader health-care system transformation underway in Ontario, which emphasizes moving care into the community where it is easier for patients and families to access,” Southlake spokesperson Kathryn Perrier said in a Sept. 22, 2020 emailed statement, adding the hospital's plan is to add 49 registered practical nurse positions, 29 patient services partner positions, and three social worker positions.

Other area hospitals in Simcoe County, meanwhile, said while budget challenges are not unique, they all need more nurses and are hiring for part-time and full-time nursing positions.

Coteau said that seven months into the COVID-19 pandemic, the Ontario government still doesn’t have a plan that addresses the second wave that is coming.

“To me, this is unacceptable,” said Coteau. “The government needs to coordinate services better, they need to start making decisions and stop pretending this is someone else’s plan, it’s their plan, they’re the government, and start to make the right investments into health care …”

According to CBC News, the Ford government’s 21-page draft pandemic preparedness action plan for this fall contained, among other things, suggestions that private clinics would be paid to perform surgeries that were put off during the COVID surge this spring, and that the health ministry would address that backlog, in part, "through innovative channels such as the use of independent health facilities that can deliver additional publicly funded surgical and diagnostic imaging services”.

The CBC also reported that the document notes the government would provide an unspecified amount of funding for additional surgeries to take place outside usual hours in hospital operating rooms.

“Leaked documents obtained by the CBC shows that the government's last-minute COVID-19 plan includes sneaking privatized health care into Ontario, specifically around surgeries being performed by the private sector,” said Coteau. “There’s no secret about this government's agenda. We already know the Minister of Long-Term Care has been a longtime advocate for the privatization of health care, but to use a pandemic as a way to push privatization through the back door is a new low.”

During today’s Question Period, Elliott responded to Coteau as follows: “I will repeat, once again, that the draft that was obtained by the CBC was a draft. It has changed during that time. It addresses many of the issues that you have raised."

Elliott said the issue with respect to dealing with the several hundred thousand procedures and surgeries that were delayed as a result of COVID-19 are now being dealt with.

“People have waited long enough, they've already waited months to have orthopedic surgeries. They've waited for cancer surgeries, for cardiac surgeries,” Elliott said. “They shouldn't have to wait any longer.”

“They are working under very, very stressful circumstances,” said Elliott. “They are doing their best. We are taking a regional approach to dealing with some of those surgeries and procedures.”

“At this point, we are seeing our numbers rise, but we still need to complete those surgeries and procedures. And if some of our independent health facilities have that ability to help us, they should be doing that,” she said. “We aren't creating any more of them. They have always been there.”

.@Coteau calls out leaked plans for privatization of surgeries & the firing of nurses in @newmarkettoday. @RNAO #onpoli #cdnpoli https://t.co/PrBbufrPjI

The Ontario Health Coalition issued a news release this afternoon regarding its "deep concern about the Ford government’s privatization of health care services, the lack of a coherent plan for a second-wave of COVID-19, and cuts and layoffs at public hospitals while the government shifts funding to private companies for COVID-19 related services."

The group is calling on the government to reopen closed operating rooms and ramp up existing capacity available in the public health care system.

The coalition pointed out that hospitals are making cuts and laying off staff —  pointing to the layoff of almost 100 nurses at Southlake, as well as layoffs at Lakeridge in Durham and Toronto Rehabilitation hospitals — to deal with funding shortfalls in a pandemic, while the province is expanding privatization.

With regard to the nurses layoffs at Southlake, a spokesperson for Elliott reiterated a Sept. 22 statement to NewmarketToday that the government is investing $3.3 billion more in health care this year, the largest year-over-year increase in a decade, and it will continue to work with the local hospital to understand its systems needs, particularly in the fight against COVID-19.

"Southlake received a funding increase of over $5 million this year to expand frontline services for the people of York Region," the emailed statement said. "Hospitals are in charge of their own operations and operational decision-making. That said, when making planning decisions, we expect all hospitals to minimize impacts on frontline care."

The Ontario government on Wednesday announced it is expanding COVID-19 testing to pharmacies, beginning tomorrow, Sept. 25, for those not experiencing symptoms of the novel coronavirus.

More details on the government's plan to fight the anticipated second wave of COVID are expected soon.

20 new schools to be built in 2020-21
Oct 20, 2020 12:30 PM
Comments
We welcome your feedback and encourage you to share your thoughts. We ask that you be respectful of others and their points of view, refrain from personal attacks and stay on topic. To learn about our commenting policies and how we moderate, please read our Community Guidelines.