As restrictions ease and airlines ramp up operations, the medical officer of health urges travellers to quarantine to prevent transmission to the community that fuelled the pandemic here last March
Jul 23, 2020 12:30 PM By: Debora Kelly 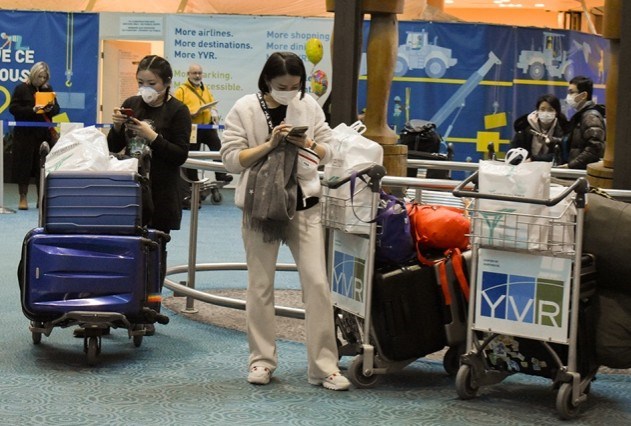 COVID-19 cases acquired through travel are on the rise again in York Region, as restrictions continue to ease and airlines ramp up their operations.

About half of the currently active 17 cases were acquired from travel to the United States, and about half were acquired through international travel, according to York Region medical officer of health Dr. Karim Kurji.

“Now as long as all these folks remain in quarantine and they get tested when they have mild symptoms, we can keep the lid over these cases and the transmission to the community, unlike the situation in early March,” Dr. Kurji said in a video update Monday, July 20.

The highest number of new travel cases peaked at 57 from March 15 to 21, reaching the highest total number on March 30.

"After March 30, there was a steady decline until June 22, when we started seeing a slight increase in travel-related cases again," said Patrick Casey, director of communications at the Regional Municipality of York.

Newmarket currently has no active travel-acquired cases, all 18 are resolved. More than half of Newmarket’s 248 cases were acquired in an institutional outbreak at a long-term care facility and group homes — three of which are currently active.

Of the active travel-acquired cases in the region, eight are in Vaughan, five are in Markham, two in Richmond Hill, one in King, and one in Aurora.

The most common cause of transmission in York Region is close contact, currently tallying 1,161 cases, the majority of which, at more than 400, are people aged under 35.

Kurji urged all travellers to ensure they quarantine themselves for 14 days “to keep our community safe", as required by a federal government mandatory order.

The government of Canada has amended the emergency order under the Quarantine Act to mandate all who arrive in Canada by land, sea or air, whether or not they have symptoms, to self-isolate or quarantine for 14 days, Casey said.

Self-isolation means staying home and only leaving your house if urgent medical care is required.

"This means go straight home, do not stop for groceries and avoid close contact with others, even in your home," he added.

Returning travellers must demonstrate they have an appropriate self-isolation plan with access to food and medication, otherwise they will have to self-isolate in a location selected by the chief public health officer, such as a hotel room, until their quarantine period is over, Casey said.

Initially, Kurji maintained the risk of catching the coronavirus in York Region was low.

The local public health unit reported its first case of COVID-19 on Feb. 28, a Richmond Hill woman in her 30s who returned home Feb. 25 after travelling to Iran. She had developed symptoms prior to her return and was symptomatic during her flight home.

The first case in Newmarket was reported March 3, a woman in her 70s who was confirmed positive for the virus on Feb. 29, after visiting the Newmarket Seniors’ Meeting Place Feb. 22 and Feb. 24, with a case acquired on a trip to Egypt.

With seven cases acquired by travel by March 6, York Region Public Health urged residents to avoid large gatherings over the approaching holidays of the Persian and Baha’i new years, Easter, and Passover, while Kurji continued to maintain the risk to residents remained low as there was no evidence of community spread.

On March 12, Premier Doug Ford encouraged residents to go and enjoy their March break vacations, followed by an announcement that schools would close for two weeks after the break.

Newmarket’s second case was reported March 17, a man in his 60s who had travelled to Costa Rica.

The majority of Newmarket's travel-acquired cases are men, aged 55 to 64.

Residents are encouraged to go for testing at the assessment centres at Southlake Regional Health Centre, Mackenzie Health in Richmond Hill, and Markham Stouffville Hospital.

The number of tests for individuals who have not been tested previously has dropped in the last weeks, Kurji said.

As York Region enters stage 3 tomorrow, Friday, July 24, and “higher risk places are opening up”, residents are reminded to continue following guidelines for physical distancing, hand washing and wearing masks, which are only “an added layer of safety for the community", Kurji said.

Regarding the current resurgence of cases with the reopening in many U.S. states, Kurji said “the situation in York Region is different; nevertheless, we cannot take things for granted. So we need to be particularly vigilant that the same thing does not happen here."

COVID-19 Today: School, child care cases for Newmarket, York Region, and Ontario
Oct 24, 2020 6:35 PM
Comments
We welcome your feedback and encourage you to share your thoughts. We ask that you be respectful of others and their points of view, refrain from personal attacks and stay on topic. To learn about our commenting policies and how we moderate, please read our Community Guidelines.