Mount Albert tree farmer Jonathan Arnold wants to put the power back into the people's hands this election
0
Oct 14, 2019 3:30 PM By: Natasha Philpott 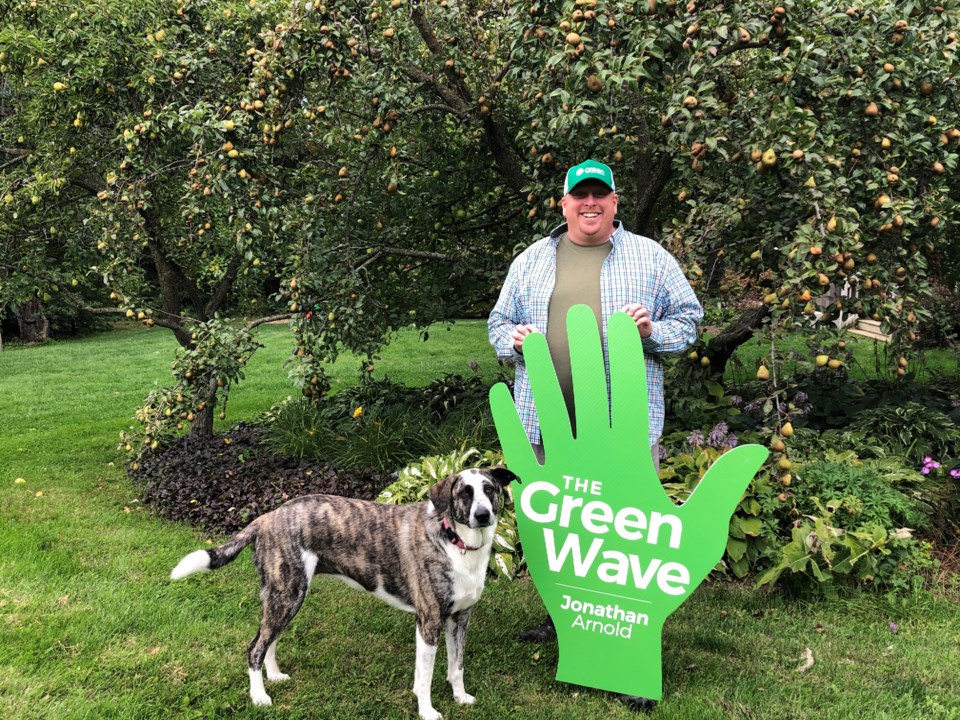 Jonathan Arnold is many things. A father, a husband, a small business owner, a farmer and now Green Party candidate for York-Simcoe in the upcoming federal election.

Since turning the legal voting age, he has always been a Green Party voter and supporter and this year he is hoping to inspire the people of York-Simcoe to think about the future and vote for what they believe in most.

“Our voter turnout is hovering around 58 to 64 per cent, that’s almost half the people not voting, so do we have a fair representation of what Canadians want? I think the simple answer is no, we don’t. So how do we increase that? We get people out to vote. How do we get people out to vote? We inspire them. We make them feel passionate about it and show them there are alternatives that make sense and that we are worthwhile for them to believe in. And that’s a big task,” he said.

Arnold has lived on his 20-acre farm in Mount Albert for 12 years. He lives with his wife and two small children while managing his family owned tree business, started by his father 45 years ago.

As an environmentally conscious person and advocate for the Green Party, he tries to live as much of a ‘green life’ as possible — growing his own food, using solar panels and driving an electric car. He also uses high quality organic product for his family tree business.

“We do aspire to grow and live a green and wholesome lifestyle,” he said.

He says he developed more of an interest in politics after having children of his own, five years go.

“When my children were born five years ago, I started paying attention to what was going on and what needed changing, and when I realized how imminent the change needed to come I decided to engage myself and become involved,” he explained on his reasoning for getting into politics.

“When I found out York-Simcoe needed a candidate I thought I could fill that job respectfully and really give York-Simcoe people something to look at and think about in terms of what a leader is, who we want looking out for our future and where we feel Canadians economic and environmental policies are going.”

The Green Party has been climbing in popularity over the years and Arnold is hoping to keep the momentum going through his campaigning.

“We really want to stimulate the voter turnout by inspiring people and we think the Green Party is a great party to do that,” he said.

Voter turnout has been low in the past few elections and he believes people have become disengaged from politics because they don’t feel like they are being heard.

“Young people don’t feel like their voice matters. We grow up in a society where we are told politicians aren’t always honest with us, and we become disenfranchised in politics before we even have the chance to vote. And that’s not good because the decisions we make today are greatly going to impact tomorrow,” he said.

The Green Party has an in depth platform, with the foundation coming from a green standpoint, but he wants people to know that their economic platform is entirely conservative.

“Greens are extremely conservative when it comes to economic platforms and we are so conservative that we actually get our budget confirmed by the parliamentary budget office,” he said.

“We have more policy, more literature, more budgeting, more economic planning on a farther spectrum than any other party.”

Arnold says most of the issues affecting Canadians today can be solved by putting the power back into the people’s hands and re-building the middle class.

Change for Arnold means hard work, but he is not afraid to challenge the status quo.

“We don’t have any leaders that want to initiate new ideas because they aren’t profitable to them. And that’s why we need a new mantra, a new campaign...because the decisions we make in this election are going to be very pivotal.”

He and his small campaign team of friends and family have been working hard, in between full time jobs and kids, preparing for the campaign and election. The team meets regularly on his deck in the backyard, which he has dubbed the “headquarters” of the campaign.

“It’s been stressful at times but really really rewarding as well,” he said.

“To me that speaks wonders of how important this is to young parents, young people and how dedicated we are to try to create change.”

As a grassroots campaign, he doesn’t have a lot of funding but has had a lot of volunteers helping out, especially young parents who have stepped up to help him spread his message.

“You think outside the box and see what works,” he said.

“The green wave is a real thing, of green party supporters that go out in public spaces and wave. And what it does is say hey we are here and we are part of your community and we want to say hello to. That is a really simple and friendly message that creates awareness,” he explained.

To help raise party awareness, he encourages people to take photos with the large green hand prop, and tagging his campaign on social media.

He encourages all voters to do their research over the next month and think about what it is they want from the government.

“Stop for a minute when you are by yourself, close your eyes and think about what you love and my guess is it’s your children, your planet, a green and prosperous future,” he said.

“Politics should be talked about and we shouldn’t let politics divide us. York-Simcoe is a community based upon multiple communities. And essentially our country is one big community, and if we divide these things we are never going to accomplish anything.”

Conservative Davidson takes York-Simcoe (12 photos)
Oct 22, 2019 10:17 AM
Comments
We welcome your feedback and encourage you to share your thoughts. We ask that you be respectful of others and their points of view, refrain from personal attacks and stay on topic. To learn about our commenting policies and how we moderate, please read our Community Guidelines.