The Registered Nurses’ Association of Ontario, Canadian Union of Public Employees, and Service Employees International Union said they've asked the province to accelerate second doses for the workers but have received no commitment
May 6, 2021 4:16 PM By: Canadian Press 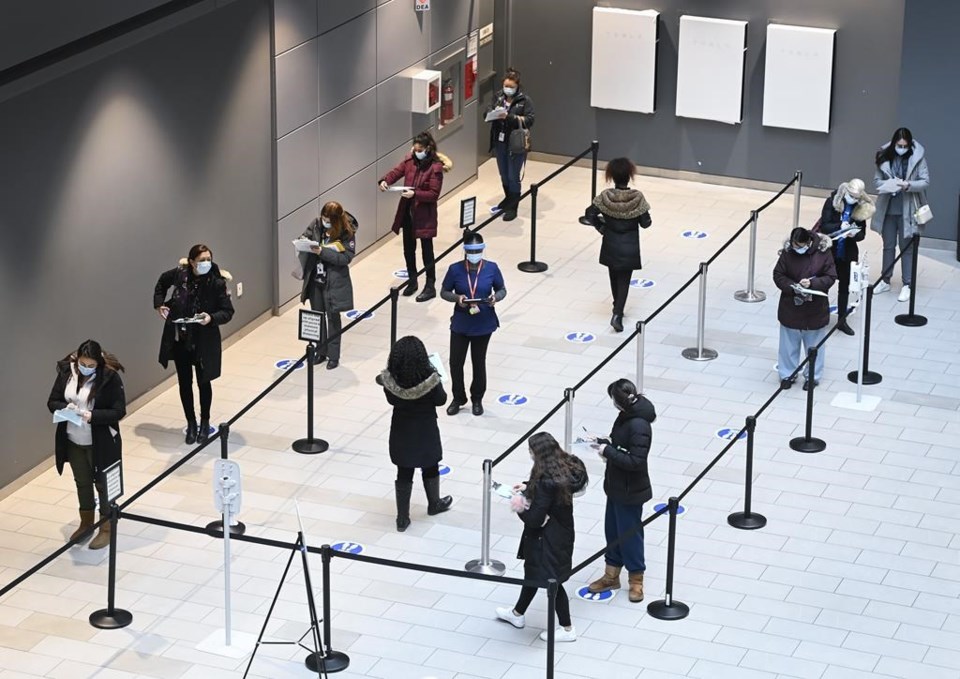 TORONTO — Thousands of health care workers need to be prioritized for full immunization from COVID-19 as they work with patients hospitalized with the deadly virus, groups representing them said Thursday.

The Registered Nurses’ Association of Ontario, Canadian Union of Public Employees, and Service Employees International Union said they've asked the province to accelerate second doses for the workers but have received no commitment.

Health care workers were among the first groups to be prioritized for a first dose of the shot in Ontario. However, the province later extended dosing intervals for COVID-19 vaccines from 21 days to four months, which means many workers are still waiting for the second dose.

"You are exposed during a 12 hour shift ... to very ill patients that are COVID positive in emergency departments, in critical care units, in ICUs," said RNAO CEO Doris Grinspun. "These patients are the sickest of the sick. One shot is not enough."

The president of CUPE's Ontario Council of Hospital Unions estimates thousands of workers in those facilities still have not received their second dose.

Data on rates of health-care worker immunization has not been provided by the government, Michael Hurley added.

"Health-care workers are very challenging to replace," he said. "You would think that the government would want to take care of them."

Ontario's hospitals have been experiencing an extreme capacity crunch for months, a situation made worse during the third wave of COVID-19.

Admissions due to the virus have hit record highs, patients are being transferred from the Greater Toronto Area to facilities across the province, and health care workers are being flown in from across the country to help Ontario.

The Ministry of Health said Thursday that 1,964 people are hospitalized because of the novel coronavirus, with 877 in intensive care and 600 on a ventilator.

More must be done to get the shot to staff who cannot spare time in the province's current, confusing, vaccine queue, she said.

"How are people supposed to be getting to these vaccination sites?" Stewart said. "They cannot line up for hours because they're so desperately needed back at the hospital. The easiest solution would be to bring it to the hospital, let the staff line up and let them get it."

A spokeswoman for Health Minister Christine Elliott said extending the interval between doses for up to four months has allowed Ontario to accelerate its vaccine rollout and maximize the number of people receiving protection.

"As we continue to receive more vaccines from the federal government, we may eventually be able to shorten the interval for all Ontarians," Alex Hilkene said in a statement.

"We need to protect the people who are protecting us," he said.

Meanwhile, a report issued by Public Health Ontario offered some insight into infections after vaccination.

It found that 0.06 per cent of the nearly 3.5 million Ontarians who received at least one dose of a COVID-19 shot by April 17 were infected while partially or fully vaccinated.

Of those, it found two-thirds were not yet protected by the vaccination when they contracted the virus, since their symptoms emerged less than two weeks after inoculation.

The report said post-vaccination cases declined "dramatically" as more time passed, with a "marked" decrease 28 days after a first dose was administered.

It said just under four per cent of the post-vaccination cases were infected seven or more days after receiving a second dose.

In the document, the health agency notes protection from COVID-19 doesn't occur immediately after immunization. Rather, it develops over time, and is estimated to reach up to 80 per cent three to four weeks after a first dose, and surpass 85 per cent following a second dose, it said.

The province expanded vaccine eligibility for several groups on Thursday – residents aged 50 and older, those with high risk health conditions, and a number of employees who cannot work from home all became eligible for a shot.

In Peel Region, one of the areas hit hardest by COVID-19, vaccinations were opened to all residents aged 18 and older on Thursday.

At a mass vaccination clinic in area, residents expressed excitement and relief about getting their first dose.

Pavan Gill, 21, from Brampton, Ont., said she was excited to be getting her first dose after experiencing a bit of vaccine hesitancy initially.

"I'm just waiting for this whole thing to finally be over," she said. "I’m willing to do what I need to do for this to be over."

The government said Wednesday it expects 65 per cent of adults to have their first dose of a COVID-19 vaccine by the end of May.

-with files from Paola Loriggio and Denise Paglinawan.

This report by The Canadian Press was first published May 6, 2021.