CANADA: Where the four main parties stand on immigration

According to an Ipsos poll, 14 per cent of Canadians cite immigration as an important issue that will influence their voting decisions
0
Sep 20, 2019 1:30 PM By: Global News 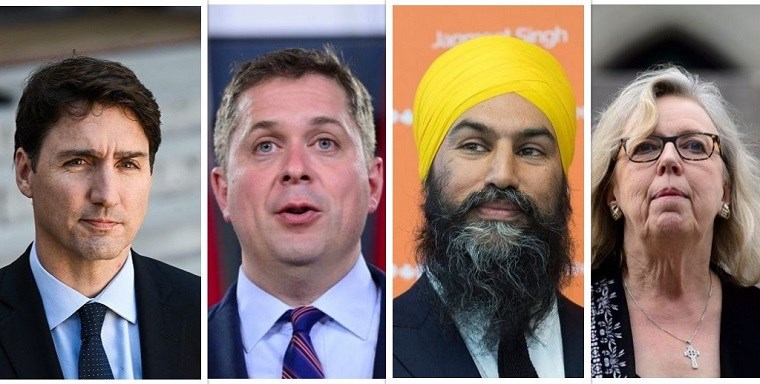 Whether it has to do with the welcoming of Syrian refugees, Justin Trudeau’s now-infamous #WelcomeToCanada tweet, irregular border crossings or backlogs in the immigration system, Canada’s immigration and refugee policies have been front and centre over the last four years.

And in the lead-up to the federal election on Oct. 21, the four main political party leaders vying to be prime minister have started to share their vision for the country’s immigration system.

According to an Ipsos poll conducted for Global News about the election issues at the top of voters’ minds, 14 per cent of Canadians cite immigration as an important issue that will influence their voting decision.

While immigration has become a rather sensitive topic as people debate Canada’s intake of refugees and the situation at the border, that’s not the only aspect of immigration the parties are seized with.

“Since Confederation, Canada has always had a pro-immigration policy because we’re a very large country and, relatively speaking, we have a small population,” said Christina Clark-Kazak, an associate professor in the University of Ottawa’s faculty of social sciences.

“We’ve always been trying to attract people to move to Canada — and it has mostly been through an economic lens so we’ve been looking for people to fill particular kinds of jobs at different times in our history.”

At this moment in time, more Canadians are leaving the workforce than entering it, according to Pedro Antunes, chief economist at the Conference Board of Canada.

“Retirement rates are going to continue to rise and … the new entrants coming into the workforce, it’s just not enough to fill that gap.”

Here’s what the different parties have proposed so far on immigration and what these two experts had to say about some of the commitments.

As of publication, the Liberals have not released their election platform. When asked for their proposed immigration policies, a party spokesperson sent a statement that referenced the Liberal government’s record on economic immigration and its new immigration levels plan — and said the party would say more in the weeks to come.

In general, research has shown that immigration has a positive impact on the Canadian economy, but the extent of that impact also depends on where newcomers settle, Clark-Kazak said.

“Whether or not that population gets concentrated in large urban centres like Toronto is another question because, obviously, the economic impact will be more marginal,” she said. “In fact, many people feel like there is room for there to be increased immigration levels.”

It’s “difficult to say” what that overall number should be, Antunes said. But as the numbers rise to respond to high demands for labour, he argued that some “flexibility” should be built into Canada’s immigration system — including its economic migrant stream — in case the situation changes.

“Right now, labour markets are very tight, the economy is growing, but perhaps governments should think about how to make the system a little more flexible so that if we do end up with a slowdown, how can we quickly adjust … to make sure that we’re not bringing in too many workers at a time when, essentially, the economy is slowing down,” he said.

When asked for the Conservative party’s immigration policies, a spokesperson directed Global News to a keynote speech delivered by Leader Andrew Scheer in May, saying the party “will have more to say about our plan throughout the election campaign.”

Scheer’s May 28 speech wasn’t heavy on specifics, but here are the commitments the party underscored:

Clark-Kazak said the emphasis on private sponsorship of refugees struck her, noting this approach, too, has an economic impact.

“It’s a win-win for the government because it’s individuals who are bearing the cost of bringing people here but also helping them to settle into Canada,” she said. “Private sponsorship [was] always supposed to be additional to and complementary to government-assisted refugees so there is a concern that, basically, there’s a privatization, if you will, of refugee sponsorship and that would definitely have an impact on the economy in the sense that there’s individuals who have to raise money to bring people here and then charitable causes might suffer because of that.”

Under Leader Jagmeet Singh, the New Democrats, for their part, are pledging to “make sure that our immigration policies and levels meet Canada’s labour force needs and recognize people’s experiences, contributions and ties to Canada.”

Both the NDP and the Conservatives are committing to improving the recognition of foreign credentials among immigrants. Not having immigrants fully employed in their professions amounts to an approximately $13-billion loss for the Canadian economy, Antunes said.

However, Clark-Kazak noted that foreign credential recognition is a piece of the immigration puzzle that’s not actually within the federal government’s jurisdiction.

Elizabeth May’s Green party is the only party so far to release a (non-costed) platform. Here’s what it pledges:

Clark-Kazak called the Greens’ platform on immigration “fairly comprehensive” but said she was struck in particular by the party’s “bold proposal” to eliminate the Temporary Foreign Worker Program.

“That is likely to have an impact on the Canadian economy,” she said. “There are many advocates, including myself, who agree … there [are] a lot of vulnerabilities built into that program, that the people who come to work under that program don’t always have their rights respected, both in terms of labour rights and other rights. But it is filling a particular niche in the Canadian economy so if we were to eliminate that there would need to be a plan in place to basically fill those with labour market shortages.”

— With files from the Canadian Press and Rachel Browne

Exclusive Global News Ipsos polls are protected by copyright. The information and/or data may only be rebroadcast or republished with full and proper credit and attribution to “Global News Ipsos.” This poll was conducted between Sept. 11 and 13, with a sample of 2,562 Canadians, either interviewed online (via Ipsos I-Say panel and non-panel sources) or over the phone. The precision of Ipsos polls which include non-probability sampling is measured using a credibility interval. In this case, the poll is accurate to within ± 2.2 percentage points, 19 times out of 20, had all Canadians been polled.

CANADA: Military has located wreckage of helicopter and remains in Mediterranean
May 27, 2020 5:45 PM
Comments
We welcome your feedback and encourage you to share your thoughts. We ask that you be respectful of others and their points of view, refrain from personal attacks and stay on topic. To learn about our commenting policies and how we moderate, please read our Community Guidelines.